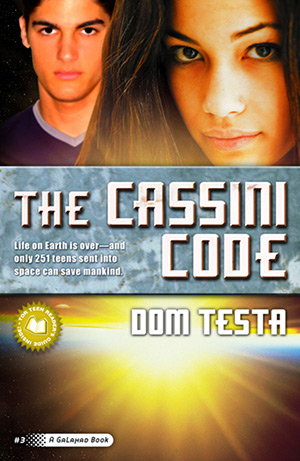 The Cassini Code is the third book in the Galahad series about 251 teenagers sent toward an extrasolar planet to avoid a mysterious comet-born virus that has infected the Earth, killing all humans over age 18. In the first two books, The Comet’s Curse and The Web of Titan, the kids overcome the threat of a saboteur and the interference of an alien energy beam. This book finds the intrepid teens passing through the Kuiper Belt that is unexpectedly more populated with rocks than anyone had guessed. The computer informs their leader, Triana, that they have only a one in twelve chance of making it through the belt unscathed.

Adding to the tension is an onboard movement to return to Earth, led by a boy named Merit who plays on the crews fear of another space disaster and homesickness for Earth. He suggests that the strange alien intelligence that interfered with them in the last book, could somehow be persuaded to cure the Earth of the comet’s virus. Triana lets Merit address the council, but ignores Merit’s call for a ship-wide meeting to vote on continuing to Eos or returning to Earth.

Triana and her chief engineer, Gap, are preoccupied with finding a way through the Kuiper Belt. Gap is also frustrated by his inability to solve a temperature control problem that causes one deck of the ship to be extremely cold. Merit uses the near-miss alarms and problems with the temperature to undermine Triana and the governing council’s leadership. The ship doctor, Lita, becomes sympathetic to Merit’s plan when her assistant, Alexa, becomes ill and slips into a coma. Merit uses the incident to remind everyone just how vulnerable they all are out in space.

Hannah, the math whiz introduced in the previous book, discovers that objects in the Kuiper Belt are not randomly distributed, but seem to have been arranged — perhaps by the alien intelligence they have dubbed The Cassini (hence the title of the book) to prevent easy passage in or out of the solar system. They are doomed unless Bon, a boy who was possessed by the aliens in the previous book, can endure a tortuous contact with The Cassini before Merit and his followers make matters worse.

The two main issues, passage through the Kuiper Belt and a proposed change in destination, are appropriate ones for future space settlers to address. The author set up a reasonable explanation for why the Kuiper Belt is more like a mine field than the empty space we know today, and provided, via the alien intelligence, a way to cope with it.

Actually less believable than an alien interference in the Kuiper Belt was the solution of the management crisis which involved Gap exposing Merit’s credibility as a leader instead of addressing the underlying issue of why they can’t return to Earth. Triana then magically becomes the admired leader again without having done much of anything. And Gap, a methodological engineer, uncharacteristically does not act based on evidence. He also dumps his girlfriend without apparent reason, leaving me wondering if some chapters were lost in a rewrite along the way.

These shortcomings aside, the story was still entertaining enough to keep me reading to the conclusion. I’m curious to discover what new danger awaits the crew of the Galahad as they emerge from the solar system in the next book, The Dark Zone (scheduled for release in March 2011).

Though the computer-narrator does an adequate job of filling in background from the previous books, prior knowledge of The Cassini and the relationships among the main characters are required to fully enjoy The Cassini Code. The information in the first book, The Comet’s Curse, is mostly repeated in the other two.

Though the listed age is 10-YA, I would revise that to 8-14. The main characters are 15, and there is no sex or foul language. I think the series will primarily appeal to girls because of the emphasis on relationships.

The Cassini Code is an enjoyable episode in the continuing saga of the teen crew of the Galahad on their way through space to find a new home for humanity.