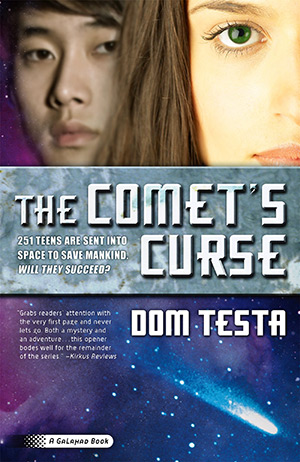 The Comet’s Curse is the first book in the Galahad series about a shipload of teenagers sent off to settle a new world around the star Eos. The reason for the voyage is that a comet named Bhaktull contaminated Earth with a mysterious virus that kills everyone over 18. One scientist, Dr. Zimmer, convinces world leaders to build a spaceship lifeboat, Galahad, and send 251 of the worlds brightest kids to seed humanity outside the Solar System.

Some people object to the Galahad project, insisting that the money and effort should be added to the search for a cure to Bhaktull disease.  The five-member teen governing council, with the aid of their AI computer, “Roc,” figure out that one of these protestors has stowed away on the ship and is intent on destroying it.

Though the reason for the “Noah’s Ark” is far-fetched, it’s not impossible, and therefore works fine as an excuse to launch a bunch of 15-year olds on their way to the stars. The teens know their parents and families are doomed, but still must deal with leaving everyone and everything they know behind. This forced exodus brings focus to one of the big challenges of space settlement: how people will deal with this separation, and also the isolation and confinement in their artificial home.

The technical side of the story is consistent with plans for space habitats. Farms with rotating crops and environments, crew exercise and recreational facilities (including a creative new kind of skateboarding track), continuing education, and skills cross-training are covered. It’s assumed that the gravity onboard is a result of their constant acceleration, though this is not explained.

The way the stowaway gets onboard, how he causes trouble, and the way the kids handle it, is logical and believable. From a science standpoint, this book rates the highest marks. Less appealing is the style of the story which is told from multiple viewpoints, including the five teens on the governing council plus Dr. Zimmer, the computer (who acts as narrator), and the stowaway. This cast of characters covers all the male/female/race/class subgroups to insure that all readers can find a character to identify with. It also allows for the inevitable love triangles and conflicts of opinion that are necessary for series to sustain themselves (though the romance in the books never progresses beyond hand holding and kissing). Most teen fiction books utilize more than one viewpoint, though most often, the viewpoints are limited to one primary male and one primary female character. Getting inside the heads of eight viewpoints in this book necessarily limited exposure to each one to an introductory level, making it difficult to get emotionally invested in any of them. Stopping to catch up with the petty romantic musings alongside their more adult responsibilities, combined with the intrusion of the computer telling the reader what was going on, slowed the plot to a crawl. And all that actually happens is that they discover a stowaway and prevent that person from destroying the ship.

I read this book when it first came out years ago. I appreciated the science and the setting, but the story was just not compelling, and therefore I decided not to review it. When I received the second book, The Web of Titan, I let it sit in my “read if I run out of other books” pile until the third book arrived, The Cassini Code. I decided to read both of these sequels, and did so one after the other. I’m glad I did, because, unburdened with having to introduce each member of the cast again, the story in both of these books was definitely more engaging. By the time I finished The Cassini Code, I’d been converted to a fan of the Galahad series. A fourth book, The Dark Zone, is due out in April, 2011.

The Comet’s Curse is a decent introduction to a scientifically-accurate teen space opera that gets more interesting with each book.