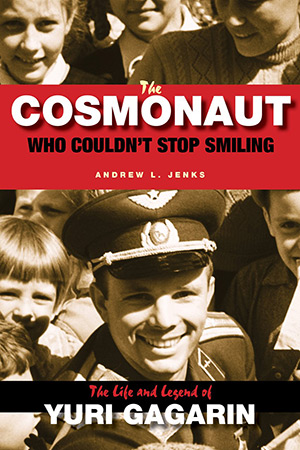 Yuri Gagarin was a Hero of the Soviet Union (that’s an actual award as well as a description), and this book makes it clear what a problem that poses for serious biographers. Was he a good student? His academic records say so. But Gagarin sprang onto the world stage as a complete unknown, representing a country whose entire societal structure was based on the notion that lying was virtuous as long as it benefited the state. In the cause of the glorious future of communism, some people were erased from public records—literally airbrushed out of photographs—while others, presented as role models, were elevated to the status of demigods. It was in the interests of the state that their heroes have no blemishes. So does it mean anything that Gagarin’s senior thesis disappeared after his flight? Perhaps not. Perhaps someone at the college just took it as a valuable souvenir. But the point Andrew Jenks makes repeatedly is that many such questions remain unanswerable. In a closed society, it was easy to sweep any historical document into files marked Top Secret.

Gagarin’s mother remembers that, when she visited the Kremlin after Gagarin’s flight, officials descended on her home and seized “family photographs, letters, Yuri’s school notebooks, and his diaries from his school days.” That material was never returned. Everything we know about the first man in space has come through a heavy propaganda filter. And the problems of getting at the factual record didn’t go away when the Soviet Union collapsed. Gagarin’s fellow cosmonauts had their own reasons for closing ranks around the official myths surrounding their archetype.

From the minute Soviet radio told the world that the first man in space was a Soviet citizen, the propaganda machine created a picture filled with paradoxes and “virtuous” falsehoods. The Soviets wanted the world to applaud their technological triumph while keeping everything associated with the flight a state secret. For instance, if they admitted that Gagarin ejected from his Vostok capsule before landing, they would be denied the world flight record; the FAI, the international body certifying such records, required that the pilot land inside the vehicle in which he took off. Nor did the official image-makers want to admit that Gagarin had landed nearly 500 kilometers west of his target. He had landed, they said, in “the planned spot.” The same thing happened to Gherman Titov on the second Vostok flight. “Oh, no, not the planned spot!” he told his comrades, from that day forward it became an inside joke among the cosmonauts. If a cosmonaut said he was “in the planned spot,” it meant he was lost.

Who was the real Yuri Gagarin, then? Clearly, the propaganda machine had little trouble presenting him as the perfect Soviet specimen. He was handsome, naturally charismatic, ambitious, smart, and deeply patriotic. Born on a collective farm and then trained as a steel worker, his transformation into a fighter pilot and space traveler was a story hard to improve. He knew how to play his part. As one college acquaintance said, he always knew how to put himself at the center of every picture. But Gagarin was also a savvy player in the Soviet political system, with close ties to the Soviet intelligence agencies (his KGB handlers were among his closest friends). He knew the ways of personal patronage, cultivating powerful sponsors and dispensing favors as a means of gaining power. But he was no more a Boy Scout in his personal life than the Mercury astronauts were. He was a hard drinker, hard partier, and seldom resistant to the women who placed themselves in his path. He once got a severe concussion from jumping out of another woman’s bedroom window to avoid being caught by his wife. In short, he was a man of superior ability…with some of the personal flaws that often come with such ability.

He was also a cultural icon, onto whom ordinary Soviet citizens could project all their hopes—living proof that their country was leading the way into a better future for all of humanity. They might not have electricity and modern appliances in their homes, but they were coming! School children were encouraged to look to his (official) life story for examples of every virtue.

The role of Gagarin as secular saint in an officially atheistic country, and the connection of his cult with Russian Orthodox religion and spiritualism, is especially fascinating. Beyond communist ideology, Russians shared a belief in Cosmism, the idea that it is human destiny to expand into the universe—led by the most technologically and spiritually advanced nation on Earth: Holy Mother Russia. As the Soviet Union’s utopian dream collapsed, the Gagarin cult continued to thrive, helping Russians survive the humiliation of the 1990s and look forward to tomorrow. It continues to thrive today.

This is one of the most compelling works of space history to be published in the past decade. Other books provide the history of programs and technologies. Jenks has given us a thought-provoking look at both the man and the society who led the way into space, and the paradoxical, ironic, and sometimes tragic ways in which they interacted with each other.