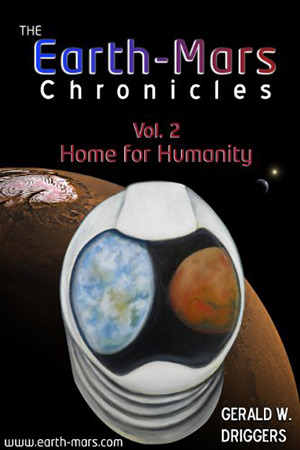 Note: This novel, although the second book of a series, can be read standalone. The author is former President of the L-5 Society (precursor of NSS).

After the world is bombarded by a swarm of meteors in the mid-21st century, the nations of Earth create a plan to ensure the continuity of humanity. They form the Earth Preservation Alliance of Nations, aka “The Alliance” with the goal of creating an asteroid defense mechanism and a second home on Mars. The latter mission involves establishing Martian settlements with appropriate representation from all of the peoples of Earth.  Soon, almost 200 countries have signed up to combine their talents and establish an initial colony of a few thousand settlers. The Alliance establishes strict guidelines for candidate selection and sets up training camps in multiple countries. Inevitably, arguments arise about the makeup of the first colonists. Every nation wants a predominance of people in the initial waves. They believe that these first settlers will set the precedents for governing Mars, and eventually benefit their own home country.

Dr. Jerry Dean, an expert on space settlement, is tasked with leading the effort and lending order to this gigantic task which is quickly becoming chaotic. Since the settlers will need an initial base which cannot be completely erected robotically, Jerry is also selected to be among the first twelve astronauts to land on Mars. This first multi-national contingent, called Pathfinders, heads to Mars to set up the base for the colonists. Ten spaceships are dispatched: two for the astronaut crew and six for the cargo, habitats and power plants. Jerry and the Pathfinders land and, armed with advanced artificial intelligence software programs that reside in each major mechanism, level ground and set up the base. The novel does a nice job depicting the challenges of working in an alien environment, such as when an accident occurs from a combination of a cliff’s makeup and the lighter gravity of Mars.

Meanwhile back on Earth, one of the training camps is attacked by terrorists. Later, while the first hundred colonists are en route to Mars, a saboteur strikes. Luckily the first wave of colonists arrives safely, as do subsequent waves. But now the stage is set for disaster as the colony reaches almost 1,000 individuals. Ethnic cliques begin to form, and some sort of rebellion seems to be under foot. Jerry starts to lose control when he denies many of their demands which do not conform to his vision for a peaceful utopia away from Earthly strife. However, heeding advice from Earth, Jerry manages to soothe the colonists and loosens the regulations. He does this in spite of his feelings that it significantly reduces the security of the colony.

Some readers may find the first half of the novel too slow for their taste, as it deals mostly with the technical aspects of setting up Mars bases and the politics behind such an endeavor. However, the rest of the novel is chock full of action. Jerry’s worst fears about what would happen if he reduces security come true. During one of his many missions with workers to set up a second base kilometers away from the first one, a calamity threatens the entire colony with death. Jerry and the others are stuck at the partially completed second base and debate methods of regaining control of the situation. The climax is tense when their attempts seem destined to fail as their plans meet unexpected obstacles, and last-second improvisation is needed.

The author, a retired aerospace engineer, spends time getting technical details right, such as accurately stating that a habitat on a spaceship rotating at once per minute on a 340 meters radius would simulate Martian gravity. The politics on the home world and at the colony far from Earth are also very realistic and provide food for thought for anyone contemplating our future on another planet.

The Earth-Mars Chronicles comprises four volumes (with volume 3 broken into two parts). Volume 4 is planned to be completed in the spring of 2015.