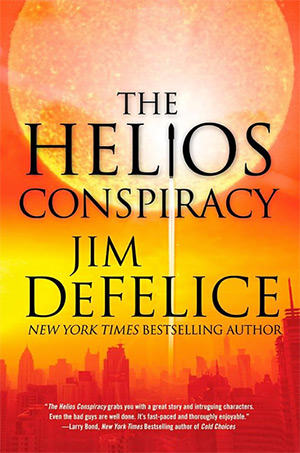 The Helios Conspiracy is fiction but not in the science fiction genre. It is a political thriller using space solar power as a backdrop for international industrial espionage. Author Jim DeFelice is a best-selling action writer who has collaborated with some of the biggest names in the field, and space enthusiasts will enjoy reading about a real-life application of future space technology in the context of an exciting spy novel/murder mystery.

The story revolves around FBI agent Andy Fisher, who is visiting New York City for the first time after saving it from a terrorist attack only to discover that the only woman he has ever loved has been murdered. The murdered woman was a key employee of Icarus Sun Works, a company that plans to launch a satellite to harvest solar energy and beam it to Earth as electricity. Later, the rocket carrying the satellite into space mysteriously explodes, and Fisher learns that the sabotage is only the start of a complicated campaign to thwart the project and steal the technology.

DeFelice wrote the book partly because he believes in the potential of space solar power. He states this on his website and, partly upon my suggestion, refers people to NSS for more information:

The story is fiction, but in fact solar power collected by satellites in high orbit could help solve America’s energy needs…. The National Space Society has an extensive list of materials, including documents and videos, that take a serious yet very accessible look at the concept, its promise and problems…. Anyone interested in space exploration should check the National Space Society out — even Andy Fisher would be impressed.

In the book itself DeFelice also acknowledges his publisher, Tom Doherty, for urging him “to write about something that had the potential for changing the world.”

The author writes factually about the beginning of the idea of space solar power in his book on page 55:

“The first person to suggest it, as far as I know, was Dr. Peter Glaser,” said Smith. “It was back in the late 1960s or so. He really paved the way.” Glaser was an incredible thinker whose interests extended to archaeology as well as outer space. Now retired and into his nineties, he was still in many ways the godfather of the space-based solar energy idea.

The author did his homework about space solar power and it was good to see the acknowledgement of Dr. Glaser’s contribution to the field. Dr. Glaser is on the Board of Governors of NSS and was formerly on its Board of Directors. Those interested in more information about Glaser’s role in space solar power may read an interview of him in the 2008 Ad Astra Special Report on the subject.

It is significant that a mainstream author like DeFelice has chosen to bring important concepts like space solar power to the attention of people outside the usual space community. I hope this will encourage business leaders, such as the fictional president of the launch company in the book, to embrace space as part of the solution to the long-term survival of the human race. On page 365, that character predicted that the “existence of the human race depended entirely on exploration of outer space…if the race was going to survive beyond the next millennium.”

Seeing that the author was a proponent of space, I contacted him to let him know that NSS was reviewing his book. I’m happy to report that he expressed interest in becoming a member of NSS and perhaps coming to a future ISDC, and that as a result of my contact he expanded his information about NSS on his website. We can always use good writers like him to bring our ideas to the forefront.

The story held my attention throughout. Overall, I think DeFelice did an excellent job in describing the political intricacies and the fact that industrial spying does occur, especially in a market where much money is to be made. The main character is an anti-hero who is unconventional, but one that I grew to like. It was also refreshing to find that rocket scientists and other principal players in the book were women, which I don’t find often in novels of this genre.

Though I got an inkling of the person/persons responsible for the tragedies in the plot by the middle of the book, I remained very motivated to keep reading to find out more about what was going on and why. My only disappointment was what I considered a rather morose ending. Without giving anything away, I’ll just say that I think most space enthusiasts would prefer a different outcome.

Overall, The Helios Conspiracy is a highly recommended good read. The author is to be commended both for a fast-paced thriller and for bringing important ideas to a wider public.