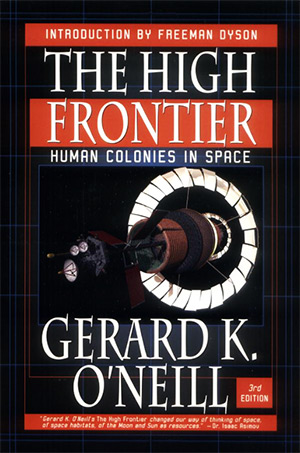 When this book first appeared in 1976, I thought it was one of THE great books about space development. I haven’t changed my mind in thirty years.

O’Neill mentions earlier authors on human space habitation. These authors include Edward Everett Hale (1822-1909); Konstantin Tsiolkovsky (1857-1935); in the 1920s, John Bernal, Hermann Oberth, Guido Von Pirquet, and Hermann Noordung; in the 1950s and 1960s, Wernher von Braun, Dandridge Cole and Krafft Ehricke. O’Neill built his space plans on these earlier authors, and he gives them credit in the book.

I was aware of the first edition of The High Frontier, but when I went to borrow it from the library, I found there was a third edition. When the first edition was published in 1976, I felt that the program outlined in the book was the way the space program should and would go. I became a fan of O’Neill. O’Neill inspired the creation of the L5 Society which merged with the National Space Institute to form the National Space Society. After I read the book in 1976, I thought that NASA was going to follow O’Neill’s lead. I was wrong. Where O’Neill described enormous colonies of humans in space, and manufacturing massive solar satellite power stations (SSPS), NASA operates the Space Shuttle and is building the International Space Station. NSS governor and Nobel-prize-winner Freeman Dyson writes in the Introduction that “Believers must accept the fact that O’Neill’s reliance on NASA to bring his dream to reality was a grand illusion.”

Roger O’Neill in the Preface writes “In 1976, a central message of The High Frontier was that the technology already existed to build the space colonies, mass drivers and solar power satellites described in the book. Today, at the beginning of the new millennium, that message is no less true. In several respects technological advances of the last 25 years have further enabled the original vision. However, the human species has collectively not chosen to develop those technologies in a way and to an extent such that we are appreciably closer to the High Frontier today.”

Freeman Dyson puts the same thought in a slightly different way. He writes in the Introduction “None of these things (in The High Frontier) have happened and none are likely to happen in the next twenty years.”

Roger O’Neill goes on to write that “Freeman Dyson … points out that launch costs for materials from the Earth’s surface are probably the single factor most limiting the realization to the vision of The High Frontier.”

Freeman Dyson also writes “O’Neill’s dream makes sense if, and only if, the cost of launching stuff from the ground into space can be drastically reduced.”

This book includes the complete first edition without changes. The second part of the book is what I would call interpretations of O’Neill’s book. There are six add-on chapters: “Space Robotics” by David P. Gump; “Technology for a Better Future: Space Solar Power an Unlimited Energy Source” by Margo R. Deckard; “Space Solar Power Systems for the 21st Century” by Peter E. Glaser; “Asteroid Resources, Exploitation, and Property and Mineral Rights or Keep Your Laws Off My Asteroid” by John S. Lewis; “A Conspiracy of Dreamers” by Rick N. Tumlinson; and “At Millennium’s Eve: The View from 1999” by George Friedman.

It seemed to me that these add-ons did practically nothing to the thrust of getting human settlements in space which was what O’Neill was about. Several were also already outdated with descriptions of cancelled programs.

As I reread the original O’Neill book, it was a booster shot for human colonies in space, the mass driver tug and the SSPS. I felt the book was a draft of a proposal to house billions of people in space and build the SSPS that would correct the Earth’s energy and global-warming problem. Energy from space could solve the problems of food production, elimination of pollution, as well as provide unlimited clean energy on Earth. With food production mostly automated, and the SSPS, there would hardly be a limit to the number of humans either on Earth or in space.

O’Neill had the answers to most of humanity’s energy problems and at the same time allowed for exponential expansion of the number of human beings in the solar system. He stated the problems confronting mankind when he wrote his book. Those problems have only become worse. He wrote “Within the past decade, four problems have been recognized. All of which relate to the limited size of Earth. They are energy, food, living space and population.”

O’Neill’s solution in 1976 was “We now have the technological ability to set up large communities in space — communities in which manufacturing, farming, and all other human activities could be carried out.”

In a caption under the famous drawing of an O’Neill cylinder it says, “Human colonies in space — not a luxury, but a necessity. Earth is overcrowded, running out of raw materials, in desperate need of a growing energy supply, and being ecologically destroyed. The problems are worse with each passing day, and there are no solutions to be found on Earth itself. Mankind’s destiny — its very survival — is in space.… But a commitment is needed, a decision to go for it and the determination to see it through.”

Reading O’Neill’s book is an inspiration for all of us to foster his plan for humanity. If you haven’t read the book, it is still highly worth the time. It is a call for action with a plan for putting humans firmly in space with the option to go to the stars.

[Includes a CDROM tucked in on the inside back cover which includes videos entitled “The Key” and “The Vision.” I did not play the CD so I cannot comment on it.]