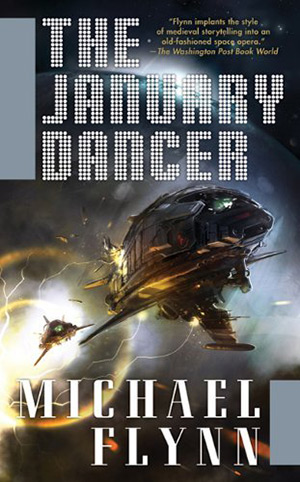 In the far-flung future, a female bard contrives and convinces a “scarred” man to tell his tale of the discovery of an alien artifact, the dancer, which supposedly grants special power to its possessor. The bard and the man meet in a bar on Jehovah, a planet at the intersection of the “superhighways” that crisscross and connect the galaxy. The tale itself begins with Captain Amos January, who is the first to encounter the artifact — thus leading to the cryptic title of the book, The January Dancer. The story has nothing at all to do with the month of January or with dancing.

But the title is perhaps indicative of a story which constantly forces the reader to change from one perspective to another, to look beyond the normal meaning of words and actions to the deeper story they reveal. In that sense, the story is not about any of the individual characters, but about the search for control of ones destiny amidst the chaos and complexity of life.

The reader is taken on a journey from an unknown planet on the outskirts of civilized space across a galaxy that is split into two civilizations: a Confederacy that conquered Earth and sent the exiles to the other side of a void called the Rift, where they multiplied and spread out to form the United League of the Periphery (ULP). The story takes place on the ULP side of the Rift. In a universe where all the ULP worlds depend on interstellar trade to survive, pirates have arisen to steal what they can sell to the Confederacy, and the ULP equivalent of the CIA is arrayed to stop them. Adding to the complexity and tapestry of civilization is the Interstellar Cargo Company (ICC) responsible for transporting most of the goods traded between worlds — and who has many of the corrupt planetary governors in their pockets.

Captain January and his crew barely escape with their lives and the artifact to the planet New Eireann where a civil war has just ended. They trade the dancer for repairs, and unwittingly, take the leader of the resistance, Little Hugh, with them to Jehovah. The civil war was put down by military units hired by ICC and headed by a female Colonel who sets herself up as planetary governor. Little Hugh, hunted down by his enemies from New Eireann, is rescued by a shady character named Fudir. Fudir offers to help Little Hugh return to New Eireann and unseat the Colonel from power, with his payment being possession of the dancer that he believes will allow the Earth to be freed from the Confederates. Little Hugh agrees, and the two of them return to New Eireann on January’s ship.

Meanwhile, a group of pirates cross the Rift at a point guarded by the ULPs military spies. Ships have been disappearing as they cross the Rift, and the leader of the spies sends Greystroke, one of his hounds, to track down a Confederate spy, who happens to be Fudir. Thus the chase begins as the pirates attack New Eireann and steal the dancer, and the other parties take off after each other or the dancer or both.

The multiple stories of Little Hugh and Fudir and Greystroke and the pirates twist around each other and take new shapes just like the dancing artifact, as they pass from place to place and add to the story. The narrative is interrupted by returns to the “present” where the bard composes verses for each new chapter of the story and the “scarred” man has to be persuaded to continue talking.

This is not a book to be read quickly. Not only is the story complex and detailed, but the language is too brilliantly constructed to be skimmed lightly. Author Michael Flynn’s prose reflects the bards talent with words taking the place of music to evoke the proper images and mood for each “stanza” of the story. Thus, January’s ship is described as “a baling-wired, skin-toothed tramp freighter” and the place where they break down is “where the flotsam and jetsam of the galaxy wash up.”

Those interested in imagining what a galaxy-spanning civilization may be like should thoroughly enjoy exploring the universe Flynn has created. And those just wishing to escape from the here and now, and lose themselves to the music, should find The January Dancer engaging and refreshing.