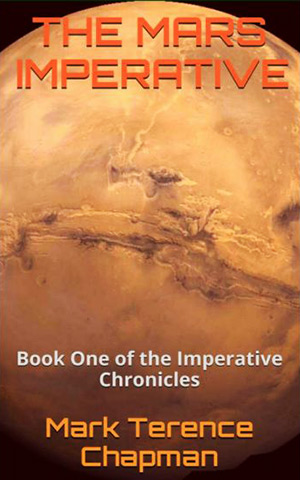 Jobs were hard to find in 2170, with thirty-eight billion people on Earth. Jamie McKie had to go to Mars and work the mines, but nothing could have prepared him for the perils, thrills, friendships, heartaches, and astonishing discoveries that awaited him.

Jamie leaves Earth, his parents, and his friends to become an areologist, which is a geologist on Mars. He is the quintessential bumbling greenhorn as he makes his way to one of Earth’s space elevators, which is located in Brazil. At the elevator port, Jamie meets Daniel Lim who is returning to Mars. Daniel takes James (as he now prefers to be called) under his wing and a life-long friendship begins. As James finds out, however, Daniel can be something of a prankster. The operation of the elevator and the description of riding it up have a nice realistic feel with regard to the accommodations, attendants, timing, and general operation.

James is about to board the elevator car headed down to Mars when a saboteur strikes. The plot thickens after James arrives on Mars, and he finds himself attempting to do his job and overcome newbie status. It seems, however, that nothing can deter those forces that are bent on drawing him into a series of harrowing adventures. Two of those forces are his new best friends Daniel Lim and Kim Cappelletti. One rescue mission to save Kim by landing on Phobos is very compelling as the reader begins to wonder if the writer is willing to sacrifice heroes.

Events turn deadly serious, however, as forces in the mining industries clash. The rapacity of one participant in the confrontation leads to deadly attacks and great damage, and James finds himself and his friends in the eye of the storm. Events unfold that force the young men to make decisions and take actions that they were not prepared for. With gut wrenching suddenness, Mars and violence turn two immature young adventurers into men of resolve and sorrow.

Each chapter begins with a short descriptive passage from the 2176 Encyclopedia Solaris, and those entries, such as explanations of the technology of space elevators, are well done. The level of presentation regarding technical features and science is quite good throughout the novel. The author’s attention to detail reflects his 35 years of software development and documentation conjoined with a lifelong interest in all things space.

The first 25 percent or so of the book sets the stage for the later adventures that befall James and his new friends. Some readers may find the story a bit slow whereas others will appreciate the human touches and story building that goes on. Without being a spoiler, you can be assured that things unfold rapidly as James is sucked deeper into the bitter clash between good and evil forces fighting for control of the resources on the Red Planet.

The author does a very respectable job of conveying the ever-present edgy sense of living at the mercy of machines that keep humans alive in habitats, while working mining machines, and in spacesuits. As is often demonstrated in real life, anything indispensable can be repurposed into a weapon. Also, Chapman shows tremendous imagination with regard to James making the most important discovery ever on Mars. His discovery leads to a mix of lighthearted and tumultuous events reminiscent of some early Star Trek scripts.

This book is a very good read for those who enjoy the combining of the detail and technical accuracy of Robinson with the human idealism of Heinlein and the action of Pournelle. I look forward to reading The Tesserene Imperative, Book 2 of “The Imperative Chronicles.”