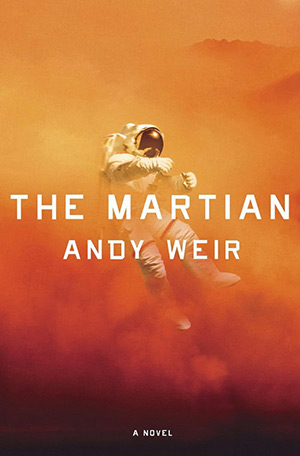 Mars is the next big adventure for humans in space, and debut novelist Andy Weir deftly captures the potential dangers and triumphs in this taut man-versus-Mars hard science thriller about survival, adaptability, and staying optimistic in the face of a thoroughly hostile unknown.

Our hero is astronaut Mark Watney, part of Ares 3, the third manned mission to Mars. Six days after planetfall, a killer dust storm with 175 kilometer per hour winds rips through their site in Acidalia Planitia. NASA cancels the mission and orders the team to leave, but in the final moments of the scramble to pull out, the wind snaps off the primary communications dish and batters Mark. His suit punctured, he’s swept away, assumed dead, and left behind in the escape.

But Mark doesn’t die. By pure dumb luck, the puncture in his suit is sealed almost immediately when his own blood and water from the suit’s supply freezes over the hole. This gives him time to stumble back to the Ares 3 “Hab,” where he stitches up his injuries and takes stock of his situation. With the primary communications dish gone, he has no way to talk to the Ares 3 team up on Hermes, the orbital station. The Hab is undamaged, with enough air filters for 31 days. He has six EVA suits, one water reclamation system with no backup, and 300 days of rations which could be stretched to 400 if nothing else goes wrong. And that’s a big if.

But Watney is an engineer, with a side hobby in botany. He’s also a Chicago Cubs fan, and no one is more hopeful than a Cubs fan. Mark knows Ares 3 won’t be back for him—but Ares 4 is due in about four years, assuming the mission isn’t canceled. They’ll be landing 3,200 kilometers away, at the western side of Shiaparelli Crater. If he can survive until then, he could get home.

Faced with challenges that would drive a normal person to their knees, Mark sets his goals and buckles down to work. Rations won’t provide enough calories for the long haul, but he can extend them if he can sprout the dozen potatoes that NASA sent along as a treat for the crew’s first Thanksgiving on Mars. And if he works his butt off and has some luck, in four years he might be able to return to Earth.

Weir, a software engineer and lifelong “space” fan, has a great grasp of the calculus of survival as well as an insider’s experience of techie problem-solving. He’s done his research and it shows in every step of Mark’s journey. Weir captures Mark’s humanity, showing us his frustrations, his sarcasm, and his self-doubts, as well as his hopes and triumphs. “I guess you could call it a ‘failure,’ but I prefer the term ‘learning experience,’” he says, after one jerry-rigged setup fails. And another time: “All my brilliant plans foiled by thermodynamics. Damn you, entropy!”

When Mark’s not fertilizing the spuds (“Godspeed, little taters!”) with waste from the toilet, or turning hydrazine into water (almost blowing up the Hab), he’s trashing the entertainment selections left by the rest of his team: Agatha Christie novels, comic books, disco, The Beatles, and really bad 70s TV. His tendency to over-analyze TV plots (“It’s clear that General Lee can outrun a police cruiser. Why doesn’t Rosco just go to the Duke farm and arrest them when they’re not in the car?”) is as endearing as it is completely in step with his analytical mind.

But Weir also gives us the other side of the story, both dark and light, from NASA administrators’ fears about bad press, to the reaction of the Ares 3 crew when they learn that Mark is still alive, and Mark’s disgust with NASA’s high strung “nanny” oversight: “Now that NASA can talk to me, they won’t shut the hell up.”

Charlene Brusso is a freelance science writer based outside Syracuse, New York.