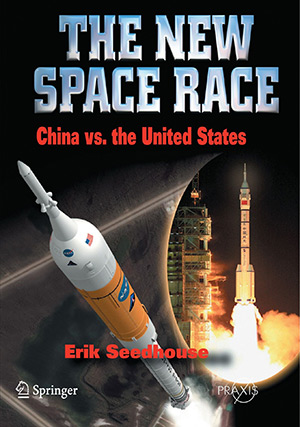 Author Erik Seedhouse is a member of the British Interplanetary Society with extensive knowledge of the political and military implications of space. In this book, he sees parallels with the situation today with China, and the U.S.-Soviet space race of 1957-1969. However, he makes clear that the circumstances today reflect a very different world environment.

Seedhouse provides many examples of why he believes the relationship between the US and China represents a ‘race.’ However, unlike the competition with the Soviets (where the US sought to catch-up), this new rivalry is an attempt by the Chinese to overtake the significant lead that America currently possesses.

The space race of the earlier era was highlighted by the ominous surprise of the Soviet Union’s miraculous technological rise from the ashes of WWII. They presented a military and ideological threat to the United States that provided an extreme motivation to embark on a crash program to beat the Russians to the Moon — at any cost.

The new space race, as defined by the author, is more subtle. It involves a nation that (like the Soviets) is diametrically opposed to the ideology of the United States, yet is inextricably tied to it by an uneasy economic relationship. Although well behind the US in space technology, China has publicly embarked on an ambitious effort to close the gap, including pronouncements that it will orbit a manned laboratory and send taikonauts to the Moon.

Seedhouse notes that the advances made by the Chinese are a result of an energetic “buy, copy, steal” policy. Moreover, like the former Soviet Union, the closed nature of the PRC masks much of its capabilities and intentions. Yet the author weaves together both public pronouncements and analysis of actions to portray China as a major military threat to America. Examples include the development of an anti-satellite weapon and the marketing of high tech weapons to rogue nations such as Iran.

The author provides a brief historical perspective of the military potential in space. He cites Herman Oberth in the 1920s describing orbiting mirrors that could focus sunlight to destroy terrestrial targets. Wernher von Braun in the pre-Sputnik days of the 1950s wrote of orbiting nuclear weapons directed from manned space platforms. A more contemporary Donald Rumsfeld oversaw a widening of space assets (non-nuclear) under both the Ford and Bush (43) administrations.

The author repeatedly characterizes China’s stated goal of using space for “peaceful purposes” as “nothing more than hot air.” He contends that China perceives the United States as a security threat—not so much for an overt massing of weapons in space, but rather its superiority in the use of space-based assets that provide for effective conduct of war. These include reconnaissance, intelligence gathering, radar mapping, GPS, and command and control — whose impact was evidenced in the two Iraqi conflicts.

I was impressed with the character of the book and the quality of the ideas brought together. The author provides a good overview of U.S. space policy and its complexities, and the impact of International Trade in Arms Regulations. Key elements of this policy are much the same as the concept of “freedom of the seas” and use such phrases as “control of space” as an adjunct of U.S. intentions.  According to Seedhouse, these phrases apparently alarm the Chinese.

Just as the first space race was driven by possible offensive military operations, so is the Chinese version. Although the prospects of nuclear weapons in orbit are still not regarded as rational options, the use of laser weapons and ‘kinetic energy kill’ systems for ballistic missile defense and as anti-satellite weapons are described. The book highlights the technological complexity of the many and varied aspects of strategic defense in today’s aerospace environment.

Additonal similarities between the two space races include the impact of the deterioration of the U.S. public education system. A chart showing the Chinese far out-producing the U.S. in engineering degrees is reminiscent of America’s fears during the first space race. Also similar to the first race, the Chinese seek to use their mastery of space as “a seal of legitimacy for the government…” — using their newfound space dominance to assure ‘domestic tranquility.’

The book, finished just after the Obama administration took office, includes optimistic statements supporting the Bush Vision for Space Exploration (VSE). These were apparently premature given the most recent policy decisions to step back from the Constellation Program and its lunar exploration goal. Perhaps this recent turn of events makes it even more imperative that advocates on both sides of space policy issues are made more aware of the implications of China’s intentions as presented in this book.

The author laments the expected hiatus in America’s human space program, when contrasted with the highly motivated and directed Chinese program. Yet he again provides encouraging thoughts that even the Soviets failed to achieve human lunar flight, and they were every bit as capable as the Chinese. While the Soviet space race was ultimately de-railed by high costs and technological problems, the new race with the Chinese is being funded by America’s extraordinary economic partnership in which trade and monetary policies assure China’s continued growth.

In a section entitled “Why Cooperation Won’t Work and Why a New Space Race is Looming” Seedhouse makes many challenging statements such as “Washington has learned through bitter experience that international projects almost always end up costing more, taking longer, and delivering less than a national program.” He contends that China’s primary objective in participating in international cooperation is simply to obtain technology for its own military programs. Another sub-section entitled “Diplomacy in orbit has no effect on Earth” needs no further elaboration. He also affirms that regardless of which diplomatic path America pursues, the Chinese will continue to acquire and develop space technology to assure a dominant role in world power politics.

As noted, the book includes historical perspectives, along with descriptions of current technologies to help the reader who may not have significant knowledge of the space environment. Though some topics such as the reasons why international cooperation will not prevent a space race are treated superficially, periodic sidebars do provide for elaboration on some obscure topics. An extensive list of references follows each chapter, confirming the extent of the author’s research. Because Seedhouse covers many varied aspects, it may be difficult to follow and comprehend some of his objectives.

Strong statements about the ominous aspects of a pending arms race in space may lead the reader to suspect that the book will not have an encouraging conclusion and makes for tense appraisal along the way — but the last chapter has some interesting revelations and perspectives. Despite the problems noted, this is an excellent book for its overall content and insight and I encourage at least 535 other Americans to read it… OK, 536.