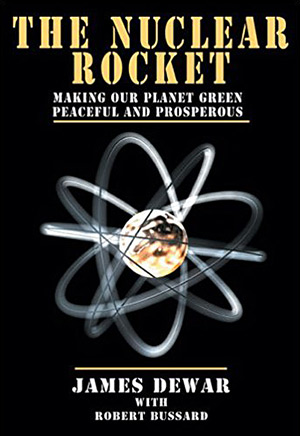 This is the author’s second book on the topic of nuclear power for space propulsion and one that advances several revolutionary themes. The principle argument is that the nuclear reactor is the only viable primary source of economical rocket power. Dewar not only advocates that premise, he states unequivocally that it is the only truly practical means to travel efficiently through the solar system. While at times his assertions appear dogmatic, the wealth of data presented go far to support his position. Tying in the subtitle “Making our Planet Green, Peaceful and Prosperous” requires the reader to move well into the book to understand the relationship.

The preface, for all its brevity, is a summation of Jim Dewar’s belief in the economic, social and political importance of nuclear energy. It emphasizes that this book is quite simply an extension of his first, To the End of the Solar System: The Story of the Nuclear Rocket. Dewar has accomplished an exceptional effort of directed research relative to his goal.

The preface also contains the statement that the “nuclear and space programs have been a primary driver of the US economy since WWII.” This declaration is likely to be hotly contested, but is followed up with an effective factual basis. Dewar makes many such strong assertions and on occasion, the reader may think some are “overstatements.”

For any of Dewar’s vision to come to fruition, the long held ban on nuclear devices in space needs to be revised to permit their use. The text brings into focus many misconceptions of the safety issues, most of which are addressed in the book.

Beyond the technology are the political, economic and social changes that Dewar envisions resulting from the use of nuclear power. The extensive planning that he has put together to effectively move space exploration, colonization and exploitation into the public domain may at times overwhelm the reader. Corporate structures, government agencies and oversight are tightly bound into the plan. This book does not simply inform about the advantages of a nuclear-based propulsion program, it is a call to action to create a privately funded and democratized space program.

In a preface written by nuclear advocate Robert Bussard, he writes “This book will give a different perspective on nuclear rockets and on the space program they alone permit.” The reader may find this difficult to accept until well into the book. There are many such assertions that Dewar himself makes that will cause the reader to sit-up and take notice. The author might well have used less startling claims to soften the impact of his objective — the use of nuclear propulsion to dramatically lower the cost of doing business in space. However, James Dewar is intent on creating a polemic environment. His disdain of the current status-quo of NASA and the space industry in general comes through very clearly. But, unlike other critics who may note problems, Dewar not only identifies the quandary, he has a plan for revolutionary change in the basic premise of the space program. Through this book, he presents a long-term map on how such an innovative (some might say radical) change can and must occur if we are to advance into space and transform it to serve human endeavors.

There are several areas where it is necessary for Dewar to take the reader into nuclear reactor technology. His explanations are, for the most part, very effective and understandable to the average person. While it may be helpful to have read Dewar’s previous book, To the End of The Solar System, the premise of this book is easily understood without that precondition. Appendix A and B however, would be difficult to comprehend without prior knowledge.

One aspect of both books that make them well worth the reading time is Dewar’s depth and breadth of not only the subject of nuclear power, but his inscrutable knowledge of the workings of the three branches of the US government and its many agencies and departments. His intimate knowledge of meetings and conversations at the highest levels of the government and their implications is very surprising, and his research produces interesting quotes from a variety of sources.

The author often places himself in the text as opposed to a third person perspective that some might consider more objective. This format adds to Dewar’s personally confrontational style. Anti-nuclear activists may criticize Dewar’s technological approaches. As they have done with nuclear power plants, this opposition could paralyze any movement of nuclear reactor applications for space indefinitely.

The viewpoint expressed by Dewar is one that needs to be carefully analyzed by space advocates as an extraordinary concept of moving humanity beyond the confines of a chemically-powered, government-funded, limited-objective space program. Dewar needs activists on board who are strategically placed within the government and who can influence the direction of the space program — perhaps a more difficult undertaking than building the nuclear rocket.