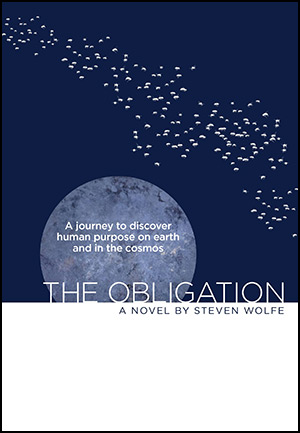 Note: This book is only available in a Kindle edition. If you don’t have a Kindle, there are free Kindle reader apps at amazon.com/kindle-dbs/fd/kcp that enable you to read it on your computer or mobile device.

If you are interested in the philosophy of space settlement and are comfortable with stories as dialogues, The Obligation is a book for you. The story follows the discussions that a fictitious congressional staffer, John, has with a series of people as he struggles to write a pro-space speech during the 1992 debate to fund the International Space Station. John’s journey in the story is learning about the message on a plaque in the office of the congressman (Grant) that he works for. The plaque reads: The colonization of space will be the fulfillment of humankind’s Obligation to the Earth.

Grant sends John to a variety of space luminaries (undoubtedly fictionalized versions of real people—one might have some fun guessing who’s who) including an Apollo astronaut (“Chip Johnson”), an astrophysicist, a science fiction writer, a space entrepreneur, and others. These individuals then talk John through different archetypes or paradigms of human behavior that space settlement achieves. These archetypes, which the author calls Endowments—The Wanderer, The Settler, The Inventor, The Builder, The Visionary, and The Protector—each have their own unique perception of how space settlement fulfills a basic human need, as defined by their titles.

This is not a science fiction book in the classical sense. For one thing, it is set in the past. It is more akin to a philosophical dialogue. Indeed, I found The Obligation to resemble several stories of this type, including Plato’s Republic, the works of Carlos Castaneda, James Redfield, or Richard Bach, and the motion picture Mind Walk. You have to have a passion for philosophy and for space to appreciate this book. Some minor subplots include a confrontation with a pro-environment, pro-responsible-spending coalition and John’s brief love affair with a pro-environment lobbyist. But the subplots and even the congressional vote itself are window dressing for the primary purpose of the book: to present a unified argument for why human beings should live in space.

Space advocacy needs philosophy: a thorough, well-rounded, and consistent worldview for “why we should spend all that money in space when there are so many more important things to do here on Earth.” That is what Steven Wolfe sets out to do. While some of the narration is a little dry, the author’s use of dialogue and story are more effective than just writing a straight manifesto. For example, dialogue allows John to poke holes in an argument, question its validity, or question how one of the Endowments relates to a vote on the space station.

If I have one gripe with the book, it is that the author doesn’t make the clearest connections between the “big picture” that philosophy provides and the day-to-day “small ball” politics that space advocates face on a daily basis, such as the annual squabbling over the NASA budget or which technology is the “best” way for lowering the cost to orbit. In fact, John makes my point toward the end of the book when he asks, “If space colonization is truly the Obligation of humanity, then why isn’t the way forward much clearer?”

While the author never states so in his novel, I believe his intent is merely to remind space advocates that they need philosophy and a long-term vision. Those big dreams and all-encompassing aspirations help sustain us and remind us of first principles when we’re bogged down in the latest minor skirmish. Both the big and small pictures need our attention, and each type of effort requires the best arguments for the occasion at hand. The Obligation reminds us of the big picture and why we need a philosophical approach to settling the solar system.