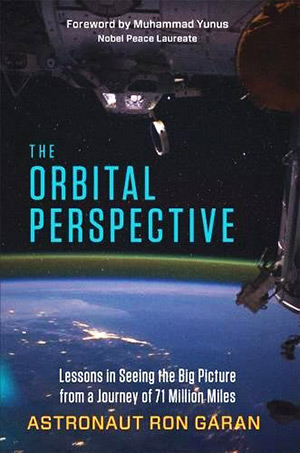 Shuttle astronauts and their flights were so numerous that very few names ever came close to public consciousness. The publishers of this book have acknowledged that in the byline of the author, a veteran of two shuttle flights and a six-month stay on the International Space Station (ISS). Thus he is not just Ron Garan, but “Astronaut Ron Garan.” It will be too bad if the only readers to be pulled in by that byline are the hardcore readers who buy any astronaut-related book, both because it deserves a wider audience and because the usual core audience will bring a set of expectations to the book that may lead many of them to disappointment.

This is not really a book about the process of becoming an astronaut, or training for spaceflights, or even  much about Garan’s experiences in space. It’s about how looking at the Earth from space affected Garan’s desire to make his planet a better place when he came home, coupled with a set of stories about people with the same perspective (most of whom have never flown in space), and about applying that desire in intelligent ways to make non-superficial and lasting improvements for their fellow travelers on Spaceship Earth. The ambition of the book is to inspire readers to look for ways to make small changes that cumulatively move mountains. Garan began this work with Fragile Oasis, a networking organization he founded before his stay on the ISS and nourished during and after that flight.

It’s a very earnest book, and Garan has the unfortunate tendency of the non-professional writer to reach for trite phrases; I lost count of the number of times “make a difference” occurred in the text. But that doesn’t mean it’s a bad book. It just means that you have to know what you’re sitting down to read, which is: a book that looks like a “space book” and is really a handbook for concerned citizens involved in charitable enterprises. (Garan has worked with a number of nongovernmental organizations, including Engineers Without Borders, an organization that is to Third World infrastructure what Doctors Without Borders is to Third World healthcare.) He emphasizes  how to avoid the mistakes that come from too narrow a perspective.

Cooperation and collaboration, enabled by modern telecommunications, is a major theme of Garan’s message. The first section of the book talks about the relationship between the U.S. and the Soviet Union (subsequently Russia) in human spaceflight, and how that relationship evolved from distrust and misunderstanding in the Shuttle-Mir flights to trusted partnership in the construction and operation of the ISS. This is the part of the book that comes the closest to the sort of “inside baseball” that the space junkie is looking for from a book with an astronaut’s name on it. But most of this material comes from stories told by Garan’s colleagues, not as first-hand narrative.

The second part of the book describes what the orbital perspective is. If it had a single moment of birth for Garan, it was when he looked down on the nightside of Earth to see the border between India and Pakistan, an illuminated line as if drawn on a globe, dividing two nations in longstanding conflict. Some borders are visible from space, and when they are, it’s because the nations so delineated aren’t friends. He writes:

“For the fifty-plus years that humans have been flying in space, astronauts and cosmonauts have commented on how beautiful, tranquil, peaceful, and fragile our planet looks from space. These are not trite clichés; it is truly moving to see our planet from space. But looking down and seeing a border…recognizing the undeniable and sobering contradiction between the staggering beauty of our planet and the unfortunate realities of life on our planet for many of its inhabitants, also inspires empathy for the struggles that all people face. In some way I can’t explain, being physically detached from Earth made me feel deeply interconnected with everyone on it.”

But what do you do with those feelings (which, Garan insists, you don’t have to go to space to experience)? The final part of the book recounts stories of people putting their empathy to practical use, and there are examples from NASA. One example is the flight surgeons and psychologists with expertise in keeping isolated astronauts healthy on long-duration flights working with the Chilean government during its months-long effort to rescue the miners trapped underground in 2008. Another is SERVIR, an Earth-monitoring program in which NASA partners with the U.S. Agency for International Development to get actionable information in many different areas, from crop irrigation to disaster relief, to the leadership of developing countries. Garan also provides examples from nongovernmental charities he has worked with.

The Orbital Perspective isn’t primarily a book for space geeks. Buy it for your friends who don’t know what putting people in space is good for. But read it for yourself anyway, and you might just learn something useful. Garan hopes that if you do, you’ll put it to good use.