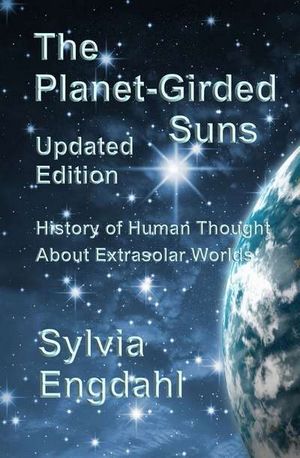 From the dawn of time, humans have been fascinated by the lights that inhabited the sky and the Earth’s place among them, ascribing to these celestial objects supernatural, religious and scientific properties. At one time, the thinkers of the day saw Earth as the center of the heavens, with stars and planets her handmaidens. Later, Earth enjoyed its rightful place basking in our star’s glow along with its sibling planets.

Sylvia Engdahl, the author of Planet-Girded Suns: History of Human Thought about Extrasolar Worlds, has examined humanities theories about stars and worlds far from our own small solar system. First published by Atheneum in 1974 for young adults, Planet-Girded Suns has been revised to include the most prevalent theories that have surfaced over the last four decades.

Each chapter of the book begins with a poetic quote included to give the reader an idea of what will follow. The Appendix contains poems and other literature that describe other worlds. The author included a discussion tying modern extrasolar accomplishments with the theories of earlier thinkers, as well as references for further study.

The author provides a historical examination covering the past several centuries of the writings and musings of scientists, philosophers, religious leaders, deep thinkers and common people, some famous and others obscure, as they pondered the idea that there were other celestial bodies in the universe that might contain life. From ancient times, people believed that Earth was at the center of the universe with all other planets orbiting our home. Over the centuries, as organized religion began dominating human thought and beliefs, the heavens took on a new importance shaped by divine intervention.

In the 1600s, Giordiano Bruno was burned at the stake for publishing in his books the heretical belief that Earth was not alone, but inhabited a universe composed of countless other worlds. Some believed that the divine being would not create only one world and populate it with humans while leaving all other worlds that he/she created barren of a thinking species. This debate persists to the present and is made more cogent by the technology that allows us to look way beyond our planet.

The great thinkers had a myriad of concepts about the existence of suns and planets beyond our home system. Some were supported by scientific investigation while others were pure speculation. For example, the renowned mathematician, Descartes, believed that there was order to the universe with planets and suns held in place by a force that was a precursor to the concept of gravity. Newton saw a universe that was ruled by order, while Huygens felt that every planet had to have inhabitants. A lesser known theorizer whom the author quotes several times, William Whewell, the Master of Trinity College in the mid-19th century, believed that Earth was the only inhabited planet in the universe. It was Whewell who actually separated science from natural philosophy, seeing it as a separate discipline managed by people known as ‘scientists,’ a term that he coined.

Some theorists believed that the inhabitants of extra solar worlds were totally alien to humans with no common ground to pursue if contact were ever established. Others had the fanciful notion that just thinking about another world would transport you there. Still others felt it was necessary to develop ways to get to other worlds because Earth’s population would soon outgrow the planet.

Such thinking led to other theories about the inhabitants of the other worlds and their acceptance or rejection of the youngsters in the galaxy. Even now, people wonder why, if there are other inhabited worlds, we have never been contacted by such space beings. Could it be that we are too primitive and they are waiting for us to mature, or are they so jaded that they just want to be left to their isolation? And to take the paranoia further, maybe it would be best that we remain alone, as the off-worlders might be hostile to human kind.

Ms. Engdahl also discusses how, at present, we have more technology than ever before to see out into the universe, but we have taken a major step back from the heady days of Apollo and retired the Shuttles without any means to go exploring for the foreseeable future. She postulates that we have become complacent in our abilities to create the technology and see no rush to find out what or who is out there.

This is an important and interesting book for examining the question of our uniqueness in the heavens. Are we alone or not? If we are alone or not, what does this mean? And will this debate influence our future exploration of space? The author’s thought-provoking presentation on the subject should provide some fascinating reading for members of the National Space Society.