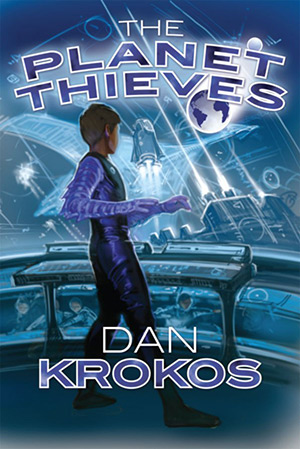 Mason Stark is a thirteen-year-old space cadet on the Starship SS Egypt. While he’s setting up a prank on his older sister (a junior officer), the Egypt is attacked by the alien Tremists. The Egypt’s officers are either taken captive or killed, leaving Mason and his two friends to lead the cadets in retaking the ship. During the battle, he learns that the Egypt was targeted because it carries a secret weapon which the Tremists plan to use against Earth. Can a handful of cadets stop them?

The Planet Thieves is a fast-paced space adventure with characters designed to appeal to teen readers, though older readers may enjoy the story too. The book is all from Mason’s point of view, though he often shares the spotlight with the main girl character, purple-haired Merrin. Since Mason’s parents were killed by the Tremists, his ambition has been to become a space soldier defending Earth and its settlements in space.

Much of the book’s setting, as well as the plot and characters, is reminiscent of Star Wars. Mason is an orphan sent off world for his training, encounters a “light saber” type of weapon, and he and Merrin have a special connection to the enemy. But the plot moves so fast that you don’t have time to ponder the characters’ motivations or question the improbable things that happen such as why 13-year-olds are cadets in the first place, why, after 60 years of war, they don’t know what their enemy looks like, why officers die because a deck collapses when they had the ability to turn the gravity off, or why the kids would plan an attack with a hand weapon that was proven ineffective in a previous engagement. Oh, and never mind how they can see lasers in the vacuum of space.

Despite the implausible science and tech, this book is a fun read, and could inspire a few discussions about how humans could or should respond to an alien attack. Were the adults in the story ethical in building the weapon that the aliens want to take from us? If you had the ability to create such a weapon, would you?

Despite being a military science fiction story, The Planet Thieves is totally rated “G” with all deaths being bloodless and occurring “off stage.” No kids experience any serious injury, though one character loses a relative. There is also no romance, though Mason acts as if he is sweet on Merrin.

The ending is rather contrived, especially the idea that an alien race could develop spaceflight capabilities and deploy them under the described conditions… but the pace is so frantic by the end of the book, that readers are likely to sail right past all the silly coincidences and improbable capabilities and want to find out what crazy dumb thing happens next!

And they won’t have long to wait because the next book in the series, The Black Stars, is now available.