Book Review: The Plundering of NASA 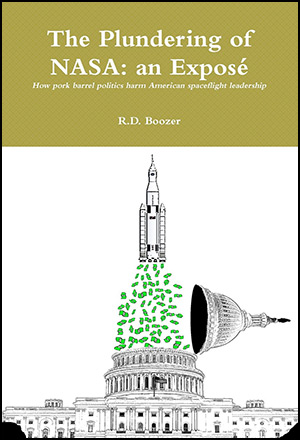 In this book, author R. D. Boozer, an astrophysicist and lifelong space enthusiast, addresses an issue that has been nagging at many of us who grew up during the late 1950’s and 1960’s, when a spectacular new advancement in space was happening just about every month. For Americans of that era, it seemed as if anything was possible once we set our minds to it.

The author contends that the American manned space program has made essentially no progress in the past forty years. The heady dreams that America would lead the expansion of humanity into space that were kindled by the breathtaking achievements of the Apollo program have long since died in the hearts and minds of many of us who came of age during the Apollo era.

What happened? In this meticulously researched book, the author relates in detail his view on “how pork barrel politics harm American spaceflight leadership” (the subtitle of the book). The author pulls no punches and names names.

It is the author’s contention that:

Mr. Boozer wants to see NASA once again become what it was in its early years, and what it could become again—an organization on the leading edge of technology, pushing the envelope to expand human capabilities and to move outward where our destiny lies, in space. He also describes many ways in which he thinks this can be accomplished through “a practical, affordable and ambitious national space program starting now,” including items like commercial crew, propellant depots and other space infrastructure, the NAUTILUS-X deep space vehicle, and heavy lift launchers privately proposed both by United Launch Alliance and SpaceX.

I find the author’s arguments compelling, but regardless of your opinions on these issues (some of which are undoubtedly controversial), I recommend the book as a very thought-provoking analysis that should not be ignored.