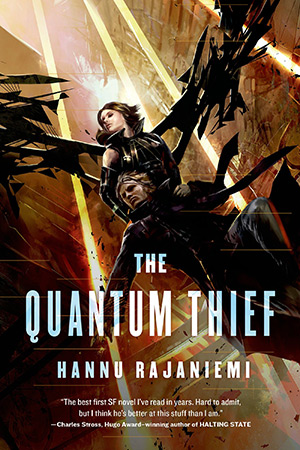 What would humans be like in the future after colonization of other planets and interaction with alien civilizations? Would they have the same values as we do, or have evolved into a different species totally dependent on technology?

The author, Hannu Rajaniemi, who has a Ph.D. in string theory, has utilized the science fiction genre to paint a picture of human and non-human interaction set in a floating city hovering over Mars several centuries in the future. Originally from Finland, the author lives in Scotland and is a director of a think tank involved in artificial intelligence and math.

The Quantum Thief is difficult to read, with unfamiliar terms that are only partially defined as the book progresses. This reviewer found an online glossary of terms by Karan Gill. Many of the terms come from other languages including Hebrew, and can also be traced to early science fiction authors.

The primary setting of the story is the ‘Oubliette,’ a moving platform above the surface of Mars, which is the only human civilization left in the solar system. Humans must live here to avoid the ‘phoboi’ plague which resulted from the Martian civil war in which the slaves who terraformed Mars rebelled against their enslavers. The platforms move to avoid the phoboi, which are self-replicating machines.

Time is the critical measurement of a person’s life and is the only currency. Each citizen has a ‘Watch’ which records how much time they have to live before they enter a state called the ‘Quiet,’ where they become machines that are used to run the city. The Quiets all have ‘gogols,’ which are artificial intelligences that can be transferred to other bodies but also controls them while the Quiets operate the machinery that sustains the Oubliette.

Technology is in the form of ‘exomemory’ in which a person ‘blinks’ to access all of society’s stored information. Each person has ‘Gevulot’ which is a privacy protocol that controls social interaction; permission must be given to penetrate one’s gevulot.

The book opens in a ‘Dilemma Prison’ where a prisoner is condemned to play a perpetual game of war in which he must shoot the person in the next cell or be shot by him. In reality the prisoner is killing himself and being reborn daily. The major protagonist is Jean le Flambeur, a master thief and criminal whose crimes included stealing art and antiques as well as being a mind burglar.  He is freed from prison by Mieli, an agent of the ‘Pelligrini,’ one of the founders of the ‘Sobornost,’ the actual rulers of the solar system. Mieli has a sentient ship, Perhonen, which takes them to the Oubliette. Here le Flambeur must find people who knew him in a former incarnation of himself as well as his long buried memories in order to complete a task for the Pelligrini.

A concurrent story line involves Isidore Beautrelet, an art student and amateur detective who is summoned by the ‘Tzaddikim,’ learned and righteous people, to solve a murder of a chocolatier. It takes  most of the story to tie the two protagonists together.

The real reason that le Flambeur is on the Oubliette is to steal time from one of the city’s most prominent inhabitants who has chosen to die prematurely. With the help of Beautrelet, le Flambeur exhumes the body and determines that Time has been changed by one of the warlike groups. This is the real reason that le Flambeur was secreted out of prison: to determine how society is being manipulated. In the ensuing battle between good and evil, le Flambeur and Miele escape the Oubliette and resurface in the author’s next two books: The Fractal Prince and The Causal Angel.

The Quantum Thief is not the usual fare for NSS members in that it portrays post-human society in a different light. I have been a fan of science fiction for a long time and find comfort in the recognizable physics and other sciences that crop up in this genre. This book is confusing, hard to understand without the handy glossary, and takes a long time to get to the crux of the story line. Our members might like it for its divergence from the comfortable as well as its view of the human society of the future.