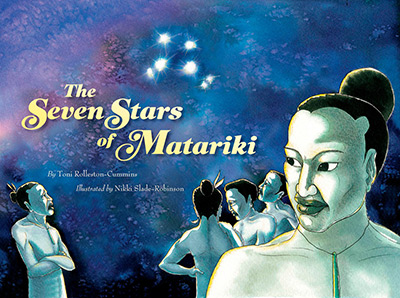 The asterism of the Pleiades in the constellation Taurus has played a featured role in the mythology of cultures around the world since ancient times. The familiar shape of a miniature dipper is easily spotted even in the light-polluted skies of western cities. This star cluster is particularly significant because it lies along the ecliptic which is the path of the sun in the sky. Currently, the cluster rises just before the sun in early June, but 6,000 years ago, its rising coincided with the spring equinox in the northern hemisphere. In many cultures, including that of the Maori, the native people of New Zealand featured in this book, the heliacal rising of these stars marks the beginning of the new year. Therefore it is not surprising that this cluster is featured in Maori star lore.

The Seven Stars of Matariki tells the story of how these stars came to be in the sky. The main character is Mitai, the youngest of eight brothers who is gifted with the magical ability to change into birds. His seven handsome and conceited brothers are only interested in women as beautiful as they are. Typical of mythological stories, their arrogance leads to their undoing when they fall hopelessly in love with seven mysterious women who turn them into their slaves. Concerned for his brothers, Mitai uses his magical abilities to see through their disguises (the illustrations show the reader that the women are not beautiful to him), uncover their plot, and enlist the help of Urutengangana, the god of the stars, to rescue his brothers and place the bewitching beauties out of the reach of mortal men in the sky.

The tale is embroidered with words from the native tongue such as koroua (old man), wahume (women), and tiwaiwaha (fantail bird) that are easily understood in context with the illustrations and also defined in a glossary. Matariki, which is the name given to the Pleides, is also the name of the New Year’s festival held the first new moon after the rise of Matariki in New Zealand. Matariki is not included in the glossary since it is the name of the cluster. However, I’ve been told it translates as “tiny eyes” or “eyes of god.”

This picture book is excellent for sharing another culture and also the wonder of the night sky with children. Adults will treasure the story that can be shared with friends and family while out observing the stars in the fine tradition of people throughout human history who have been bewitched by their beauty.