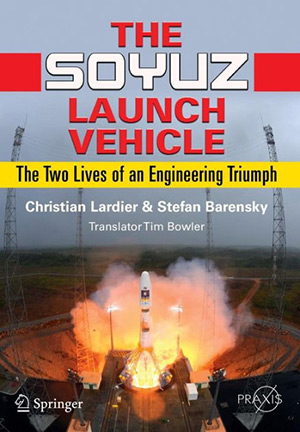 The book The Soyuz Launch Vehicle consists of two major parts. The first, Soyuz in the East, documents much of the Soviet rocket engineering events of the early years as authored by Christian Lardier. Part Two, Soyuz in the West, provides insight into what is referred to as the second life of Soyuz in league with the European Space Agency (ESA) and the French, is written by Stefan Barensky. Both are notable members of the aerospace publishing community.

Part One begins with a flurry of names as it establishes the Soviet’s dedicated thrust into German technology, covering a wide area of advanced propulsion systems following collapse of the Nazi war effort. Brief bios establish the primary players that will emerge in various roles as the story unfolds. The book is a significant resource for names, dates, and organizations, but it is not an easy read because it defines many of the various ministries in bureaucratic terms with little insight. The “building” of the Soviet version of the V-2 rocket is also included at this point giving some historical context and interest.

The book is copiously illustrated with both photos and line drawings that add considerable interest. Many of the early photos are of poor quality and are reproduced at a small size that makes distinguishing details difficult.

The design criterion for the Soviet’s first ICBM (which is essentially the topic of this book) is sparsely covered. One of the many hurdles for the author is the wide variety of names used for the missile over the course of its life (and the book). It is initially defined in the chronological sequence of the early soviet developments as the R-7 (the seventh iteration of surface-to-surface missile) and its engineering designation 8K71. It is also referred to periodically as Semyorka, which was (and still is) an affectionate term meaning “old number seven.” The wide variety of launch configurations, while fascinating, are difficult for the reader to keep in perspective. Although known by many names such as Soyuz, I will refer to the rocket as the R-7.

The development of the four-chamber RD-107 and RD-108, the primary engines for the R-7, is adequately if not thoroughly described. But the periodic insertion of names that seem somewhat irrelevant at various points interrupts the reader’s flow. Much of the other sub-systems are ignored.

The author was faced with the problem of weaving a plethora of facts into the narrative while trying to keep the main story line interesting. It was a challenge that was complicated by the requirement for portions of the manuscript to be translated from the Russian language into English. Apparently because much of the research was accomplished through official documents, there is little insight into the reasons for various actions and thought processes of the individuals involved.

Noticeable effort is made to cover the design and engineering of the launch facility and pad transport vehicle. The early guidance and tracking platform is also defined along with the rather primitive living conditions of the workers. Some Russian terms such as “sharashka” were not initially defined leaving the reader wanting. The index consists of people only, so finding your way around the text is a hit and miss proposition.

A brief segment that outlines Sergei Korolev’s life will leave the reader looking for a good biography such as the one by James Harford. There are other brief bios of such as Valentin Glushko that are interesting and fill in some of the gaps. While Glushko’s bio is also somewhat limited, it manages to describe his extra-marital affairs in some detail. Even the official Soviet position of anti-Semitism is explored. In this section the author includes a rather brief description of the first Sputnik launches but unfortunately with little detail.

Some aspects of political and personal intrigue are revealed that enveloped several projects. Animosities led to the imprisonment and murder of scores of scientists and engineers during a 25 year period that included the imprisonment of Korolev and Glushko in the late 1930s. The importance of Communist Party membership is also outlined.

The author takes you on a wild ride—so many projects are intermingled that it tends to distract your train of thought. The book actually covers much more than the R-7 program and its facilities, as many of the other launch complexes are detailed. Payloads of both military and civil projects are described—sometimes in very general terms and at other times in excruciating detail. Often this gives you just enough to want more (or to skip over the irrelevant aspects).

The narrative is often not chronological but driven by payload applications that take the reader off track. Also adding to the confusion is the periodic insertion of advanced concepts that never were funded or were canceled such as nuclear powered rockets. Periodic duplication of information occurs, perhaps because of the layout.

Part Two—Soyuz in the West—begins with a replay of the political and military impact of the first Sputniks and is always fascinating reading. These events are accurately and interestingly described. It quickly and effectively documents how skillful the Soviets were in elevating a spectacular achievement into a near panic in the US, aided by the American media and the political aspirations of key officials in congress.

Over those years no less than six different nomenclatures had been used to define the R-7. It wasn’t until the collapse of the USSR in 1990, and the availability of the official (and secret) designations, that some sense could be made of these. The book tries hard to accomplish this, but as much of the designations were based on initial payloads of the different versions, it is not an easy task.

This second part of the book subsequently deals with using the R-7 as a commercial launch vehicle and a co-operative effort with ESA. If book one was hard to follow because of the confusion of people, places and events, book two is not an easy read either. The intrigue of the Russian bureaucrats is pitted against the French, who are not about to let their Ariane rocket be upstaged. Many pages are devoted to determining where the Soyuz will fit into the ESA launch schedule. The effective planning needed to guide international cooperation has been hindered by political maneuvering and a lack of trust in the Russians.

Plans call for launching the Soyuz (Semyorka) through the year 2020. While replacements are continually being proposed, the basic configuration has endured with upgraded engines and avionics to ensure that before it is finally let out to pasture, more than 2000 will have been launched over a period of perhaps 70 years.

Overall, the information in this book can (with some exceptions) be obtained from other sources that are much easier to read and absorb. You will have to be a bit of a masochist to include this one in your aerospace library.