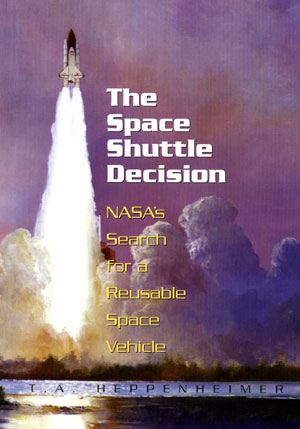 Complete online copy of this book

It has been accepted that the future of human space exploration is dependent on “relatively” inexpensive access to space. With that premise, the space shuttle design, as we know it, was born in the early 1970s. Having recognized that no one had extensively documented the development of the shuttle, T.A. Heppenheimer set about to rectify that oversight in 1996, producing two volumes by 2002. The Space Shuttle Decision constitutes The History of the Space Shuttle, Volume One. While this volume deals with the initial decision (1965-1972), it lays the groundwork for what is to come and creates eager anticipation in the reader for Volume Two (The Development of the Space Shuttle). It also foreshadows the shortfalls and tragedies that would cripple the project.

Mr. Heppenheimer has executed a masterful piece of research and writing. In the first chapter he artfully summarizes almost 100 years of technology leading to the shuttle in a brief 54 pages. While abbreviating many events and achievements, it is, nevertheless, a good overview to get the shuttle story off the ground.

He then proceeds to succinctly analyze the quandary in which NASA found itself in the mid-1960s as the Apollo program had short-circuited the accepted progression of the path to the Moon (and Mars) — the manned space station and a “winged” reusable transport. He briefly but effectively assesses various advanced propulsion systems to set the stage for the configuration of the shuttle.

While its depth and detail may discourage casual reading for all but the serious student of aerospace technology, this thoroughness is required for a book of its scope and intent. It also provides fascinating insight into the influence of such nebulous bureaucracies as the Office of Management and Budget. While most people have heard of the OMB, few have any idea of its function, who it reports to, and the power that it wields. This book illuminates all three attributes with startling clarity.

Combing through the wide-ranging historical aspects that led to the final configuration of the space shuttle, Heppenheimer has painstakingly reconstructed the technological, political, and economic hurdles that had to be overcome to produce this modern marvel. As with virtually all large programs, he observes that the shuttle was the result of many compromises — including risk.

Brief excursions that examine the Boeing 747 and supersonic transport development demonstrate two significant aerospace projects that represent success and failure. The success (747) was a privately funded venture that allowed the Boeing Company to pursue the full intent of their vision. The failure of the American SST (to proceed beyond a mock-up) was primarily the inability of supporters to convince their elected representatives of the merits of publicly funding the project. In the final analysis, both the shuttle and the Anglo-French Concord SST seemed to share a similar fate. They were both economic and political compromises that may have inhibited them from fulfilling their original visionary roles.

Heppenheimer includes enough insight into the space race with the former Soviet Union, the Vietnam War, and the racial strife of the era, to provide a reasonable context for many of the critical political decisions. The burgeoning bureaucracy that would eventually cripple NASA was only beginning to come into play as Heppenheimer retains the perspective of the period.

In the final chapter, the author presents the dilemma that faced President Nixon with respect to the available choices that NASA offered for funding following the completion of the Apollo program. These ranged from a full-scale assault on Mars with a space station and reusable transportation system, to an emasculated space program using an upgraded Gemini to maintain a token human presence in space for America. Although Nixon had not been an ardent supporter of the space program, the key concepts of the shuttle’s capabilities (reduced cost, quick turn-around, and an environment that allowed the average person to venture into space) seemed to increase his enthusiasm. He picked a middle-of-the-road effort, and Volume One ends with the basic shuttle design and funding limits established.

If readers had no knowledge of subsequent events, they might conclude that the decisions that resulted in the shuttle configuration were sound. They might also surmise that the level of airliner safety, reliability, and economy being sought would be achieved — despite the stringent series of compromises that were made. However, several of the anticipated safety features of the shuttle, as envisioned in 1972 (such as crew escape), would not find their way into the final vehicle that would fly nine years later. Moreover, the level of complex technology required to create and maintain the shuttle would escalate its costs dramatically. Perhaps the phrase “inexpensive access to space” was an oxymoron within the current state-of-the-art.

With the somewhat depressing end of the shuttle program in sight (the last flight is projected for September 2010), it is appropriate for supporters of space exploration to understand the effort that went into its creation. Its development illustrates a similar set of political and economic obstacles that the current replacement technology (ARES and the Crew Exploration Vehicle) must endure.

For readers who would like a more succinct and inclusive history of the shuttle’s life (decision, design, implementation, and operational performance) in a single volume, The Space Shuttle

by Dennis Jenkins might be considered. For the serious space historian and enthusiast however, Heppenheimer’s book is an indispensable reference.