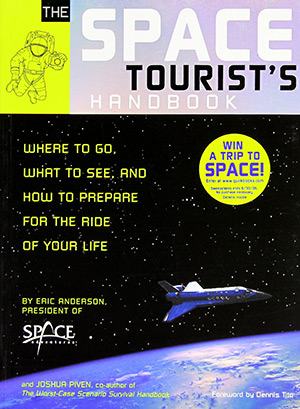 I am lying on a bed, chest down, with my head hanging off one edge as I write. According to The Space Tourist’s Handbook — Where to Go, What to See, And How to Prepare for the Ride of Your Life by Eric Anderson and Joshua Piven, this position offers the sensation of space sickness to the earth-grounded. Blood is rushing to my head, similar to what astronauts experience as they adjust to microgravity. It’s not a pleasant experience and I don’t recommend repeating it for any extended period of time — unless, of course, your consolation is going to be the view of the Earth from 220 miles high in orbit.

This is just one of the helpful tips and hints presented in the handbook. Another should be familiar to any fan of science fiction: Don’t panic.

As in Douglas Adams’ Hitchhiker’s Guide to the Galaxy, the advice to “stay calm” leads many of the lessons taught in the book. Whether discussing “How to Ace the Medical Exam” (page 89) or “How to Survive if Your Vehicle Detonates on the Launch Pad” (page 133), the authors stress that the ability to take a deep breath and steady your nerves might just save your ticket to space (not to mention your life).

The handbook is divided into two sections. The first half offers an introduction (or refresher, depending on the knowledge of the reader) to the basics of space tourism, and by that I mean the past, present and future offerings of the space-tourism company Space Adventures. Anderson, CEO and President of the Virginia-based Space Adventures, uses parts of his book as an unabashed advertisement for his company. Though others’ offerings are named, most are in some way related to Anderson or Adventures. Likewise, no specific mention is made of companies that offer competing services to Anderson’s own efforts.

To the company’s credit, though, at the time of the book’s printing Space Adventures is the only company to have launched space tourists (three, in fact) to the International Space Station (ISS). So while Anderson’s perspective may be narrowed by his own company’s goals, there is also a certain degree of validity to what Anderson feels will be the shape of the space tourism industry for years to come. (Full disclosure: From 1997 to 2001 I worked as Space Adventures’ Director of Publicity, and again as Director of Marketing from 2002 to 2003.)

With Anderson’s biases in mind, one can find some interesting insights into Space Adventures’ — and space tourism’s — future. Among the list of “global spaceports” he identifies as potential tourist launching points are the Woomera Launch Complex in Australia, Dubai Spaceport in the United Arab Emirates, and the Kodiak Launch Complex in Alaska. At the latter, a proposed polar orbit mission would take tourists — indeed, the first human space explorers — on a trip around the Earth from north to south, rather than the east to west trajectory followed today.

Due to publishing deadlines, there is little detail regarding Space Adventures’ publicly announced plans to use a modified Russian Soyuz for an Apollo 8-like orbit of our nearest neighbor. Based on other textual clues, the book appears to have been written prior to the “Return to Flight” by NASA’s Space Shuttle Discovery in July 2005 but after the Ansari X Prize was won by SpaceShipOne.

Unlike the first section, which given its nature will become more outdated with time, the second half offers the advice and instructions learned from human spaceflight over the past 40 years. Specifically, it traces the journey of a space tourist to the ISS using the Soyuz spacecraft as a launch and reentry vehicle.

It is this section that most closely matches co-author Piven’s previous title, The Worst Case Scenario Survival Handbook. Like the checkout-counter favorite of several years ago, The Space Tourist Handbook uses shaded line drawings, sidebars and step-by-step instructions to simplify the most complicated of tasks. In addition to the earlier examples, advice is offered for finding scenic photo spots on Earth (from above, while wearing sunscreen); why chewing food with your mouth open has more ramifications in orbit than poor etiquette; and the all-important (and often asked) question, How do you go to the bathroom in space?

These chapters provide readers with an introduction to the training and spaceflight process — information that is not as readily available through other sources as the material presented earlier in the book. To the casual reader, these instructions are curious and interesting; to the potential space tourist, they’re a good introduction to what they will need to learn before launch. To the trained, ready-to-fly space flight participant, this book might be better left on the ground (though Space Adventures client Greg Olsen reportedly took a copy with him to the ISS).

Ultimately, The Space Tourist’s Handbook ends with a chance (at least through June 2006) for the reader to win their own space adventure, courtesy the publishers and Anderson’s company. After reading through its 200 pages, you’ll have a better idea of whether you want to fill out the application.