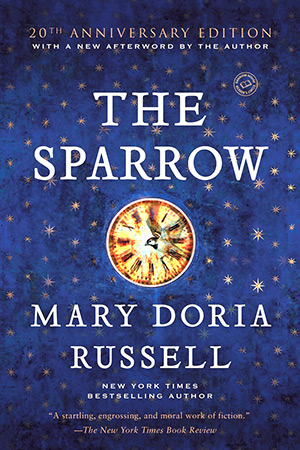 Religion is one topic that does not always get serious attention in science fiction (SF). And by serious I mean respectful, examining, and thought provoking, not slamming, mocking, or saying how much better we’d all be without it. Much of the genre is a- or anti-religious. By contrast, Mary Doria Russell, a paleoanthropologist, has written about religion very seriously in a couple of remarkable books entitled The Sparrow and Children of God, which describe the adventures of Jesuit priest Emilio Sandoz on a voyage to Alpha Centauri. The issues Russell addresses are many and complex, from the moral implications and responsibilities of “first contact” with alien races to the place of alien species within existing religious traditions to the age-old question of how good people should cope when bad things happen to them. These two books, often dark and emotionally painful, are nevertheless the best treatment I’ve seen of these topics since James Blish’s A Case of Conscience.

The Sparrow includes remarkable characterization and depictions of an alien society. Not being a Jesuit or a Catholic, I cannot judge the realism of her depictions of Jesuits or their behavior, but her characters are consistent within the world she portrays for them.

The technology of exploration is not central to the story, and I have serious doubts about the ability of the Alpha Centauri system to sustain an Earthlike planet. Nevertheless, Russell takes the time to get small things on her spacecraft right, including the power and life support systems, a plausible interior layout of the ship, and even the challenges of zero-gravity sex. This is primarily a story about people and their experiences with the unknown.

The story is, like much of SF these days, a two-track narrative: first, there is the aftermath of Father Sandoz’s return from Rakhat and his physical and emotional ruin — his hands have been brutally maimed on Rakhat and his crew have all died. Thus Russell establishes and maintains a sense of dread when we flash back to how the mission began: we know something horrible happened, but we don’t know what or why. The individuals aboard The Sparrow, an asteroid converted to fly at near-light-speed, are a mix of Jesuits and Sandoz’s agnostic or unbelieving friends. Through brief descriptions, exposition, and dialogue, Russell manages to create a handful of living, breathing, and truly likeable characters. It is this ability that makes their deaths so much more painful. This isn’t a happy tale, but Russell has points to make, and they cannot be made solely through sweetness and light. Sandoz experiences what he can only feel to be God’s love when he arrives on Rakhat. His fall from that state of bliss, and his reactions to that fall are the subjects he deals with back on Earth when he returns to the Jesuits.

On the cautionary side, The Sparrow and its sequel Children of God are not children’s books. There is personal violence, war, sexual violence, and quite a lot of profanity (which is especially off-putting given how much of it is coming from priests).

I recommend both books. For space advocates, the books offer glimpses into interstellar travel, “first contact” protocols, and moral issues arising from the human exploration of space. I’d say the books could also be enjoyed by people interested in character studies or religious fiction. The lessons are hard, and one might or might not agree with all of Russell’s theological points, but I was moved by her story and the message she tells while writing it.