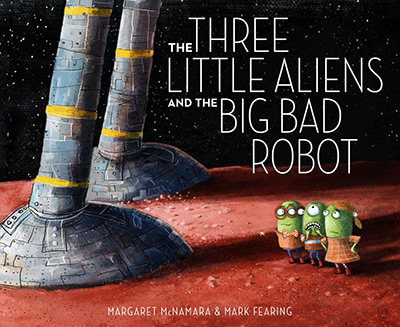 The Three Little Aliens and the Big Bad Robot is an adorable space version of The Three Little Pigs. Adults can use this book as a great learning tool about the pros and cons of places to live in space, as well as the importance of putting safety first.

The three alien siblings are Bork, Gork, and the unpronounceable Nklxwcyz (which kids will love hearing an adult stumble over!). The three set out to find a new home because theirs (on Mercury) is crowded. They pass by Venus (“too hot”) and Earth (“too crowded”), and head to Mars. The girl (Bork) decides to make her home in a rover there. The boys continue on, passing by Jupiter (“nowhere to breathe”) and come to Saturn. One brother decides to make his home on a satellite in the rings. The other brother continues on. No mention is made of Uranus. He decides to build a sturdy safe house on Neptune which has 13 moons and refreshing breezes.

Then the big bad robot comes along. He smashes the girl’s rover and she flees “at the speed of sound” to her brother in Saturn’s rings. The robot follows and smashes the brother’s satellite. The brother and sister flee “at the speed of light” to Neptune where the third brother has been watching using his telescope. He helpfully flashes his solar panels to help them find him.

The robot can’t “smack and crack and whack” his sturdy house down. So he comes in through the chimney and ends up bursting into a million pieces. The story ends with the kids “phoning home” (a nice nod to ET) to ask Mom to come tuck them in.

The librarian at Frazier Elementary in Pearland recommended this book to me saying “its a favorite read-aloud for the younger grades.” I can see why! The rhymes roll off the tongue easily and the story moves well. The illustrator did a superb job. The colors and relative sizes of the planets are consistent with the real ones.

As far as the story goes, it gets high marks. But though the “Author’s Note” states “this book is not a science book,” their claim that there is a little bit of science in the aliens’ travels leads the reader to think that they actually checked their facts. Other than the order of the planets and what they look like, the book unfortunately may leave young children with misconceptions about the planets and space environment.

The first thing I noticed is that the aliens dont wear space suits — only helmets and backpacks — and they even have on short sleeve shirts! Because they are aliens, we are left to assume that their skin can be exposed to vacuum and extreme temperatures, though the only creature known to survive both for a short time is a microscopic water bear.

Between Mars and Jupiter, the brothers pass by a “meteor.” Sorry, but thats impossible! Meteors are an atmospheric phenomena. What the author meant was either meteoroid or asteroid.

The third brother builds his sturdy safe house on Neptune. But Neptune, being a gas giant, has no surface to build on. Its large moon Triton would have made a more logical choice.

As the big bad robot approaches, the girl “didn’t feel its giant footsteps as it leapt from star to star.” Of course she didn’t feel them — footsteps require a surface, and stars don’t have any surface to step on.

I actually laughed when I read that the girl fled at the “speed of sound.” Sound is a pressure wave that cannot propagate through the vacuum of space! The speed of sound in a vacuum is ZERO! (Note that radio waves are electromagnetic radiation. We talk to people in space by converting pressure waves into radio waves and back again.) And then, she and her brother travel “at the speed of light.” Only light, which has no mass, can travel at that speed. All objects that have mass, even tiny electrons and protons, have to go slower. Theoretically, if objects can find a way to skip over the speed of light, they can go faster than light. But they can’t go at the speed of light under any circumstances. Sorry, but its the law!

Finally, theres the issue of distances in space, a subject often misunderstood by children, and some adults as well. In the story, the kids travel in essentially no time from place to place and communicate with each other and their mother instantly as well. None of that is possible in real space. It takes light 8 minutes to reach Earth from the sun. It takes about 12 minutes to reach Mars. Jupiter is about 40 minutes from the sun, and Saturn is about twice that. Uranus is about 2.5 hours away, and distant Neptune is more than 4 hours. And the planets are not lined up on one side of the sun, so the distance, and hence the time it takes light to travel between them, may be twice that much.

Therefore, while it is a neat idea to have the brother on Neptune watching the events and signaling his siblings, he wouldn’t see anything until three or more hours after it happened. It would take another three or more hours for his siblings or his mother (back on Mercury) to get his message. I understand the needs of the story dictate instant communications, but parents might want to explain that this part of the story is purely fictional as well.

The Three Little Aliens and the Big Bad Robot is an entertaining space fairy tale, but parents are encouraged to  replace “meteor” with “asteroid,” let them know that Neptune has no surface, that sound doesn’t travel in space, and objects, even aliens, can’t travel at the speed of light.