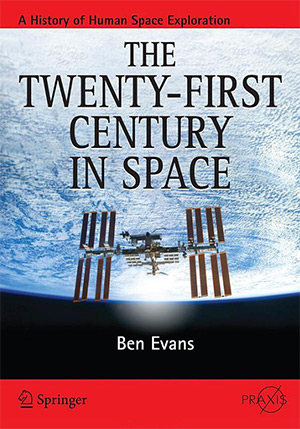 The Twenty-First Century In Space is the sixth and final volume of space historian Ben Evans’ monumental History of Human Space Exploration series that began with the dawn of human space travel in Escaping the Bonds of Earth.

This new book covers space history from STS-70 in May 1995, through the Shuttle/Mir program, to the STS-99 landing on February 22, 2000. The title may seem to be a misnomer since it covers only a few events that took place in this century. However, the reader may choose to look at the missions covered in this book as the foundation and learning platform that enabled the construction of the ISS, and continued the human exploration of space into the twenty-first century.

The Twenty-First Century in Space begins with some drama and a little humor. STS-70 was rolled out of the vehicle assembly building (VAB) in May of 1995. While on the launch pad, 71 “excavations” were made in the external tank foam insulation by Northern Flicker woodpeckers. After being returned to the VAB for repair, Discovery was launched on July 13, 1995 to deploy the TDRS-G satellite and conduct an extensive science mission.

Evans puts great emphasis on providing in depth biographies of each astronaut on every flight. As he weaves the personal stories and objectives of the missions together, it is interesting to see how people with many different backgrounds, education, and experience ended up on the same flight. The author also describes how each crew worked together to become a highly efficient professional team, assuring success on every mission.

The crew of Columbia STS-80 made the longest shuttle flight ever, setting down on shuttle landing facility runway 33 at KSC on December 7, 1996 after a mission of 17 days, 15 hours 53 minutes, 18 seconds. During the flight the crew had released and retrieved two space research satellites, WSF-3 and SPAS-2. During the descent, on his sixth and final shuttle flight, Story Musgrave experienced the entire entry, from Mach 25 to wheel stop, while amazingly standing up on Columbia’s flight deck.

The shuttle continued to set records, launch and retrieve satellites, and doing basic research, but on March 14, 1995, Norm Thagard rode Soyuz TM-21 to the Mir space station, becoming the first American to ride a Russian rocket.

Then on June 29, 1995 STS-71 Commander Robert (Hoot) Gibson guided Atlantis to a docking with Mir, and the first connection of U.S. and Russian spacecraft in twenty years. Thagard and two cosmonauts returned to Earth aboard Atlantis after 115 days, 8 hours, 43 minutes in space.

On October 29, 1998 the world saw U.S. Senator John Glenn return to orbit aboard Discovery on STS-95. The flight was billed as a pursuit of science objectives which would investigate the effects of space travel on the human body, especially Glenn, the oldest human to venture into space, at the age of 77. The mission was a great success, with the science objectives met on the Spacehab module and measurements taken of the solar wind and corona by the free flying Spartan satellite. On November 7 Commander Curt Brown guided Discovery to a flawless touchdown, safely returning a space hero to an adoring public.

Another milestone was achieved on July 23, 1999 when STS-93 launched with Eileen Collins at the controls of Columbia, becoming the first American female spacecraft commander. STS-93 deployed the Chandra X-ray Observatory designed to image neutron stars and the ever popular black holes. Collins steered Columbia to a picture perfect landing on July 27 at KSC.

Seven American astronauts flew long duration missions to Mir from March 1995 to June 1998 totaling 907 days aboard the space station. Arguably the most harrowing day on Mir was February 23, 1997. American Jerry Linenger and cosmonauts Valeri Korzun, Alexander Kaleri, Vasili Tsibliyev, Alexander Lazutkin, and German Reinhold Ewald used three fire extinguishers to put out a fire caused by the space station oxygen generating system. They spent several hours on oxygen masks before the air was clear of toxic smoke. The Russians downplayed the significant danger and delayed notifying NASA officials for several hours after the fire. Many at NASA believe it was a near miss of total catastrophe.

Another complete disaster aboard Mir was barely averted on June 25, 1997. During a test of the rendezvous and docking system of Progress M-34, the cargo delivery craft went out of control, impacting the station solar arrays and punching a hole in the Spektr module. Astronaut Mike Foale and cosmonauts Lazutkin and Tsibliyev were able to rescue Mir only by sealing off the damaged module and reorienting the station solar arrays toward the sun, using the Soyuz Earth return vehicle, to restore power.

Mir was occupied until June 16, 2000. To the disappointment of many proud Russians their symbol of national achievement and perseverance was deorbited on March 23, 2001, disintegrating over the South Pacific. However, the dream of continuous human occupation of space was already being realized with the launch of the Zarya (dawn) module on November 20, 1998 from Tyuratam, to a 51.6 degree inclination. Then on December 6, 1998 the International Space Station (ISS) came into being when the STS-88 crew aboard Endeavour connected the American Unity module to Zarya, and entered the facility on December 10.

Author Ben Evans has created a magnificent chronology for all space fans and a valuable resource for everyone interested in the history of human space exploration. The comprehensive scope of the satellites launched, experiments completed, and innovations created are written in easy to read language, but also in exacting detail. At the same time they are not presented as anonymous missions racking up science data and statistics, but compelling stories about the humans who accomplished these incredible feats.

This series has been a heroic undertaking by author Ben Evans. Its extraordinary completion warrants a prominent place in the library of any space enthusiast.