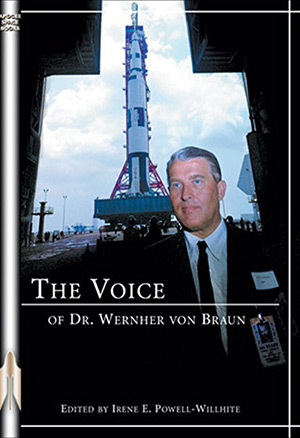 It is rare in the space field—as in many other endeavors—for someone to be skilled in the technical aspects of their work as well as be able to communicate that work effectively to the general public. In astronomy and planetary sciences the prime example of this is the late Carl Sagan; more recently, Neil de Grasse Tyson has taken on a similar role. From a more general spaceflight standpoint, though, the examples of such polymaths are less obvious. One could make the case for Princeton physicist Gerard O’Neill, whose visions of space settlements helped establish a space advocacy movement, the L-5 Society; Robert Zubrin, the engineer who designed the Mars Direct mission architecture, among other projects, has today become the most zealous public advocate for human Mars exploration. However, perhaps the best, and arguably most effective, engineer/salesman for spaceflight was Wernher von Braun. When he wasn’t designing a series of increasingly powerful rockets, he was communicating his vision for space exploration through a variety of media, from magazine articles to Disney TV shows to, as seen in The Voice of Dr. Wernher von Braun, a series of speeches to audiences far and wide.

The Voice of Dr. Wernher von Braun, edited by Irene E. Powell-Willhite, archivist at the US Space and Rocket Center, consists of the text of several dozen speeches given by von Braun over nearly three decades after his arrival in America following the Second World War. That first speech was given in early 1947 at a Rotary Club meeting in El Paso. Even though rocketry was still in its infancy—von Braun devoted much of that speech to a primer on rocket design and orbital mechanics—he described a future where winged rockets would fly to a rotating space station that would be used as a staging area for missions to the Moon. The technical details in his speeches changed over time, of course, but the inevitability and importance of spaceflight remained central to his speeches, whether he was talking to NATO generals or members of the Mississippi Dental Association.

The speeches featured in this book are, in many cases, a study in contrasts. Clearly von Braun had a passion for spaceflight, which is evident in many of his speeches. Yet, many of his speeches included in the book consist principally of rote recitations of facts about the launch vehicles and spacecraft developed or on the drawing boards by his engineers, hardly the most spellbinding material. In a 1959 speech at the dedication of a museum devoted to Robert Goddard in New Mexico, von Braun is critical of those “practical men” who gauge proposals “in terms of concrete, measurable, immediate results”. However, in many of his speeches at the dawn of the Space Age he described some very practical, concrete applications of spaceflight, including communications, weather forecasting, and navigation.

One flaw in The Voice of Dr. Wernher von Braun is that, in many cases, the book doesn’t provide enough background information about the speeches to put them into the proper context. While there is some introductory material about some speeches, for others there is no information other than the location of the speech, not even the date of the speech. That makes it difficult to understand why he was talking about specific topics to specific audiences—why, for example, was he addressing a meeting of Mississippi dentists? An undated speech, apparently from the early 1960s, given at Alabama A&M University (AAMU) is prefaced only by the statement that the university is “an historically traditional land-grant school,” a statement that makes little sense. AAMU, though, is in fact a historically black university, something that, given the era, puts a very different spin on some of von Braun’s comments at the end of his speech: “Human beings often resist change, clinging tenaciously to entrenched habits—especially adults. Sometimes we seem confused, frustrated, and even angered by an advance that upsets our normal routine or outlook.”

Few would argue that von Braun was not one of the most influential engineers and visionaries of the Space Age, at least in the United States, and more than a few people wish that there was someone similar, with that combination of technical expertise and rhetorical skills, promoting spaceflight today. What is interesting, though, about reading the speeches contained in The Voice of Dr. Wernher von Braun, is that von Braun often justified spaceflight in the most general of rationales: the advancement of science and society. “Because man can go into space, he must,” he said in his AAMU speech. Or, as he told the El Paso Rotarians in 1947, “Interplanetary travel—No man can say exactly what it will bring.” A half-century after the dawn of the Space Age, anyone who wants to step into the shoes of von Braun will have to do a better job articulating why we should explore space if such programs are to have a stable, if not vibrant, long-term future.