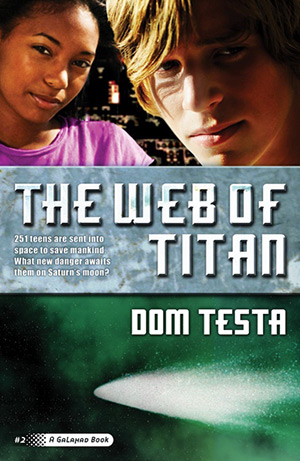 The Web of Titan is set four months after the end of The Comet’s Curse, the first book in the Galahad series. The ship, containing 251 teenagers fleeing the outbreak of a virus on Earth that kills anyone over 18, is on approach to Saturn. The ship will get a gravity assist to speed it on to its destination star, Eos, by swinging around the giant planet. During their flyby, the teens have been directed to pick up a pod launched by a research station on Titan. For unknown reasons, all communications with the station have been lost, and the researchers presumed dead. What is in the pod?

While they swing around Saturn, a contingent of the crew suffer debilitating headaches with no apparent cause. Bon, one of the teen leaders and the romantic interest of the council leader, Triana, is affected the most. His eyes glow, and while delirious, he speaks in languages that he hasn’t learned. Ship systems fail, and their chief engineer, Gap, loses confidence in his ability to fix things. His new girlfriend, Hannah, a math wizard with some odd habits, figures out that an energy beam is directed at the ship from Titan. The beam is causing the headaches and ship failures. If the crew can’t shut it off, the ship will be destroyed.

This book nicely weaves the personal stories of the characters with the actions involved in solving the mystery and averting the threat to the ship. The emotional impact of the story, like the first book, is somewhat hobbled by too many points of view, including the same five teens and the narrator computer introduced in the first book plus Gap’s new girlfriend. However, because the characters and setting are now somewhat familiar, the constant viewpoint changes are less jarring, and the romantic subplots seem less like distractions and more a part of the story.

As for the science…. The way the ship nabs the pod will likely cause most space scientists to roll their eyes: a tractor beam ala Star Trek. “A ghostly faint light shot from the lower front edge of the ship and locked onto the pod, which visibly shuddered. The spinning motion of the small craft slowed.” (Insert sound of clearing throat here.)

No form of electromagnetic energy is visible in the vacuum of space. We see lasers only when the light is reflected off of particles of smoke or (a favorite of teachers) chalk dust.  Maybe the ship is venting waste overboard and that reveals the beam?

Light beams can move objects — the Galahad uses a solar sail in conjunction with its ion engines. A solar sail works by photons bouncing off of a reflective surface. Light can also move objects by heating them and causing them to lose mass — the way the sun causes a comet to sprout a tail. But neither of these would pull the pod toward the ship.

Magnetic attraction could work if the ship has a strong field — its using an ion drive, so that is at least a possibility. And using a magnetic shield to guard against cosmic rays provides a reason for the ship to have this capability. The pod would only respond if its magnetic, either made of iron or charged as an electromagnet. Assuming this is the case, however unlikely, the ship could point one of its magnetic poles at the pod, causing the opposite pole of the pod to be attracted to the ship. It would require a powerful force to rip a pod out of orbit around a world with twice the mass of the Moon, especially considering the force drops off as the square of the distance between the two. But its possible, and that’s good enough for even this nitpicking technical editor.

Besides getting the pod onboard, the tractor beam serves another useful function: it sets up that energy beams are a normal way of doing things in this future setting. So when Gap’s girlfriend discovers one emanating from Titan, it’s only strange because of its origin and intensity, not because it exists or affects the ship.

The story plays out in a consistent and plausible way using the contents of the pod and abilities of the crew to once again avoid disaster. The postulated alien intelligence was refreshingly different, and the story concludes in a satisfying way. After I finished The Web of Titan, I was anxious for the next book, The Cassini Code, and glad to already have it on hand.