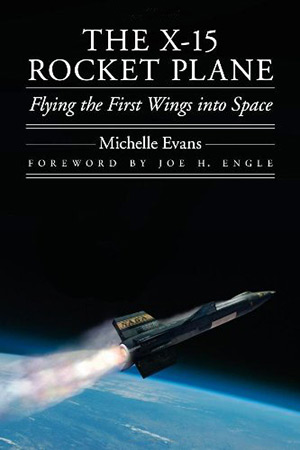 The X-15 rocket plane was a research spacecraft that made 199 flights over the course of nearly a decade between the late 1950s and the late 1960s. It was the first winged vehicle to fly a human into space and return to a runway landing. Much has been written about the X-15, which prior to the lionizing of NASA’s Mercury astronauts, was considered the cutting edge of aerospace technology, and its pilots defined what is meant by the phrase “the right stuff.”

As NASA’s space program moved through the Mercury, Gemini, and Apollo programs, reaching its highest point when Neil Armstrong set foot on the Moon, the X-15 program fell out of the headlines. Since that time, the story of the X-15 has not been adequately told until now.

Michelle Evans has written the definitive book on the X-15, the men who flew her, and the managers and support people who kept her flying. The X-15 Rocket Plane contains important information about the program, the plane, and the people involved, that can be found nowhere else. Ms. Evans literally spent decades and criss-crossed the country to interview the principals in the story, as well as mining details from volumes of the program’s documentation and from other sources. She has produced a narrative that puts you into the cockpit with each of the pilots that flew the X-15 on every one of their flights, including the ones that were aborted before the X-15 was dropped from its B-52 carrier aircraft.

One thing that comes through clearly from all those aborts as well as the flights that were not aborted, is that the X-15 was definitely an experimental aircraft/spacecraft. Something went wrong on almost every flight. It is a testament to the professionalism and skill of the pilots that so many flights were successfully completed. There were a couple of crashes, one instantly fatal and the other causing injuries to the pilot that contributed to his death years later. The fact that so many other flights landed safely despite anomalies and failures that cropped up after the X-15 dropped away from its carrier plane borders on the miraculous. The pilots were among the best that North American Aviation, the military and NASA could field.

Another thing that this book gives us is a keen insight into the minds of the pilots, particularly as they reacted to one life-threatening situation after another. We see the unquenchable thirst for flying faster and higher, but more importantly, for meeting the objectives of each flight. Many experiments were performed. Much data was taken. Much of that data proved invaluable later when the Space Shuttle was being designed.

The X-15 Rocket Plane chronicles humanity’s first experience at actually flying into space. The Mercury, Gemini, and Apollo capsules went to space of course, but they did not fly there. They were just along for the ride provided by Atlas, Titan, and Saturn boosters. The X-15 program was a critical step in mankind’s quest to escape the grip of gravity and put us on a path to other worlds.