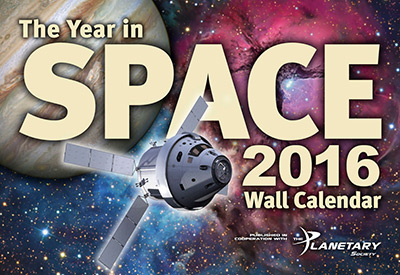 This gorgeous 16×22 inch (when opened) space-themed wall calendar is a perfect gift for any space enthusiast. The top half of each month has a theme depicted by a large central photograph. A special “Fast Facts” section lists information about the theme and six or more additional photos add supporting details. Each image includes a paragraph that enhances understanding for anyone between the ages of 8 through adult. Every month also includes a short biography of an important astronaut, astronomer or scientist who contributed to the central tenet.

The bottom half of each month lists the days in the traditional 7 days by 5 weeks grid. Each day consists of three sections. The top entry lists relevant sky events, such as meteor showers or astronomical alignments. The second is a visual depiction of the Moon’s phase. And the bottom of every day lists up to four historical facts with the year they occurred. These include birthdays of famous scientists, astronomers and astronauts, and important spacecraft events like launches, orbits and landings. There is room in the middle of each day for calendar owners to enter a short note. Every month also includes a Sky Guide relating which planets are visible and where to locate them. And not to be missed at the month’s bottom is a random space fact that provides mind-boggling space trivia.

January kicks off the year with the Curiosity Mars probe’s “selfie” stitched together from over 50 images. The month includes close-up photos of weathered veins in the Martian terrain and large tears on one of the probe’s wheels. Another image looks at a drilled bore hole and the instruments used to examine it. February focuses on ALMA, the Atacama Large Millimeter/Submillimeter Array observatory. It includes beautiful ALMA images of dust lanes and a planet-forming disk around a star in the constellation Taurus. Apollo 9 is the highlight of the next month, since the mission took place in March of 1969. There is a bio of James McDivitt, the first to pilot a Lunar Module, and multiple NASA images of the flight. These include the LM “Spider” and the Command Module “Gumdrop.” An interesting trivia entry states that after jettisoning Spider, the astronauts fired its ascent stage for 6 minutes, causing it to orbit the Earth until 1981!

April focuses on solar sailing and The Planetary Society’s LightSail experiment. It also adds future plans for sunlight propulsion, such as in NASA’s Near Earth Asteroid Scout CubeSat mission. Gravitational Lensing is explained in May’s calendar, with stunning Hubble images of galaxies twisted into an Einstein Ring. June is research month on the International Space Station. Calendar owners will read about the various experiments done on board, from farming to fire to biology. A surprising fact states there are three free-flying satellites the size of bowling bowls loose inside the ISS that test multi-body formation flying and other satellite technologies.

Jupiter’s Great Red Spot highlights July with gorgeous images of how the spot has changed over time. The August calendar again treats owners with spectacular pictures of deep sky images, this time in the constellation Sagittarius. It includes a short discussion of the black hole located there that may lurk at the heart of the Milky Way. Enterprise, the first Space Shuttle, had its public rollout in September of 1976 and adorns the pages of that month. Photos include the Enterprise during flight and ground tests. The month also includes a photo of Gene Roddenberry and the original cast of Star Trek at the craft’s unveiling.

Iapetus, one of Saturn’s moons, is shown in amazing detail for October and incredible pictures of the Andromeda Galaxy highlight November. The year closes out with a large image of the Orion Crew Module and details about its design and capacity. Who knew that its launch abort system produces a higher peak thrust than the Atlas rocket that John Glenn rode into orbit in 1962 (the month’s fun fact)?

A spiral-bound 6×9 inch (when closed) desk calendar is also available for those who want to take “space” with them to the office. This version has a single breathtaking photo on each left-hand page and a week at a glance on the right. The days include lots of white space for marking appointments. The photos are all different from the calendar, but the days on the right include the same three daily sections of astronomical events, Moon phase and historical events. It is great separately or as a complimentary gift with the wall calendar.

NSS members will enjoy this calendar, both for its spectacular images as well as the detailed facts about them. And even knowledgeable owners will be surprised by some of the space trivia sprinkled throughout its pages. It makes a great gift for yourself or the space enthusiast on your list.