Book Review: To a Distant Day 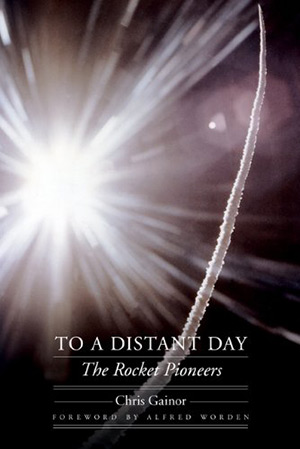 On March 16, 1926, Robert Goddard manually turned the fuel valve on the first liquid-fueled rocket while an assistant lit the igniter in the combustion chamber. His brainchild flew for just two and a half seconds. It soared 41 feet into the air and landed 184 feet away.

It was a good start.

Just 43 years later, a six-and-a-half-million-pound rocket with three stages, whose first stage alone was three times as tall as the maximum altitude reached by Goddard’s pint-sized proof of concept, would take three astronauts to the Moon. Between those two dates came a lot of development work, both theoretical and in practical engineering. That development, carried on at first by lone inventors like Goddard, and later with progressively larger teams, is the story told in this book.

The story starts much farther back than 1926. Pre-modern science fiction writers like Lucien of Samosata in the second century A.D. imagined interplanetary flight, and Chinese use of black powder rockets probably dates to the eleventh century. These earliest precursors—everything up to the beginning of the twentieth century, when technology began to be mature enough to offer more than dreams of space travel—are dealt with in the first chapter. Then author Chris Gainor gets down to business in describing the careers of our “founding fathers” Konstantin Tsiolkovsky in Russia, Robert Goddard in America, and Hermann Oberth in Germany. All three began their careers as school teachers, became theoreticians of spaceflight in their spare time, and eventually moved on to practical experimentation. Goddard got farther with his experiments than the other two, and he didn’t get that far; none of his rockets went much higher than one mile. He was the best funded of the three, with support from the Guggenheims, but even with that he only had four assistants.

The real advances in practical rocketry had to wait until governments were willing to put large sums into bigger teams. The stimulus for that would be wars, hot and cold. The Nazis hired the nucleus of the amateur group calling themselves the Verein fur Raumschiffahrt (Society for Space Travel) who had worked with Oberth, including a bright young college student named Wernher von Braun, and set them up in a research facility near the village of Peenemünde on the North Sea coast with the assignment of making a rocket that could circumvent the limitations imposed on their artillery by the Treaty of Versailles (rockets weren’t mentioned in the treaty, since their use as weapons was beyond the imagination of its authors). They sank a lot of money into development of the V-2 that could have gone into weapons less technologically advanced but more effective. The “wonder weapon” helped win the war—for the Allies, not the Axis.

However ineffective the V-2 was as a weapon, it pushed rocket technology forward by leaps and bounds. It was the first rocket to fly outside the atmosphere, a true suborbital rocket. When the war ended, each of the allied governments scrambled to appropriate as much of this technology as they could. The Americans got the best of it; they shipped 100 V-2s and tons of blueprints, along with the cream of the German engineering team, to the New Mexico desert. The Germans trained the next generation of American rocket engineers as they continued flying V-2s as research platforms. The Russians got what was left of the German hardware and engineers. Although this was useful to their research, the Russians did most of their own development work under the direction of the last of the pioneers covered in the book, the brilliant engineer Sergei Korolev.

Entire books have been written about the subjects covered in each of the chapters in this book. Gainor’s bibliography lists the most important of these. For those who have already read extensively in this area, Gainor’s book reads like a greatly condensed survey of the material. There’s not much that’s new here. For this reviewer, the most interesting (and tragic) new material was the coverage of America’s first experiments with animals in suborbital V-2 flights. Time after time, they survived the flight into space, only to die in crashes when their parachute recovery systems failed.

I recommend this book for people for who are looking for a useful overview of the period leading up to the first human spaceflights. The development of rockets and the foundational experiments in survival of organisms in space are covered, including the balloon flights into the stratosphere and Robert Stapp’s rocket sled experiments with extremely rapid acceleration and deceleration.