Book Review: To Orbit and Back Again 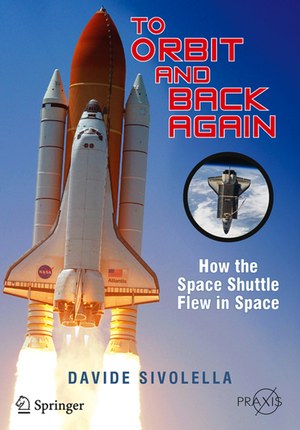 To Orbit and Back Again is a comprehensive reference about the space shuttle. And I mean comprehensive! As astronaut Story Musgrave writes in the foreword, “I got into it and couldn’t get out of it. Despite having assisted in the development of the shuttle, having taken it into space six times, and all in all worked on the program for 20 years, I read on with curious excitement to discover how and why I flew it the way I did, and how and why the vehicles responded the way they did. This book took me beyond my knowledge of the systems: It could have served very nicely as my textbook for flying the shuttle.”

As former shuttle flight controller, I didn’t expect this book to have much to teach me, either. But like Story, I was pulled in and fascinated by the details and the accuracy of the explanations.

This book covers each system, from the hardware to the operational limits imposed and the various failures experienced, via 245 diagrams and photos and crisp, clear explanations. Sivolella also includes an acronym list and glossary and index. The amount of research that went into this book boggles the mind. The bibliography is impressive not only for its completeness, but as a list of the best sources for each topic covered. For example, the author doesn’t just rely on standard books and interviews, but shows us the real Entry Checklist onboard the orbiter and trajectory displays shown in Mission Control. You can read about entry through Earth’s atmosphere in other books, but through reading To Orbit and Back Again, you can understand it.

But the real beauty of this book is in the human stories of choices made and lessons learned as a result of shuttle flights—and the realization that these stories and lessons apply to any complex technical program humans may attempt in the future.

Here is an example: the shuttle had six computers. Why so many? First, the choice of computer architecture using a distributed command approach led to a need for quadruple redundancy. But four computers running the same software could all fail the same way. So a fifth computer was added with software created by a separate team. And to avoid a power surge (or lightning strike!) taking them all out, another computer was flown as a spare. This logic will likely apply to future vehicles that include technology that is as new as flight software and computers were back when the shuttles were being developed.

Each chapter explains what the system does, how it does it, and how it came to be that way. Then the author provides examples of the system’s use from flight experiences, such as what happened when two computers failed on STS-9, the first Spacelab mission.

My husband Ted was on console (as guidance) when those failures happened, and we can confirm the book’s details are accurate. They delayed landing while they swapped one computer with the onboard spare and rebooted the other. The rebooted one failed at touchdown. The investigation showed that in freefall, pieces of solder had gotten loose in the units. When jets fired (and at touchdown), pieces shifted around and caused the failures. After that flight, IBM, who built the computers, began testing all the new units by placing a microphone on each box and shaking it, listening for any loose particles inside. Now when I see someone shaking a birthday gift with their ear to the side trying to guess what’s inside, I can tell them they are using the same method engineers use to check for loose parts inside computers that will fly in space. These real world connections are precious to those of us who are always looking for an excuse to talk about space!

Former astronauts and shuttle workers will enjoy this book immensely for providing a broader context for their parts in the program—and lots of cool stories to share with friends and family. For writers and historians, this book is a must-have reference source for anything related to the shuttle program. For engineering and space science students, it is a valuable inside look at what to expect in designing and operating complex space systems. For space enthusiasts, it may be a bit intimidating to read, but well worth the effort to capture a true understanding and an appreciation for the challenge of building, maintaining, and operating the world’s first reusable spacecraft.