Book Review: To the End of the Solar System: The Story of the Nuclear Rocket 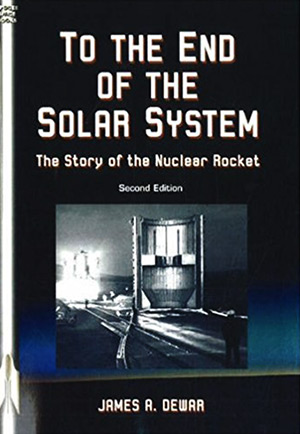 Imagine if astronauts today were able to look back at Earth from the very edge of the solar system. If we had continued the development of nuclear propulsion begun in the 1960s, by now we would not have to imagine.

Back in 1906, Robert Goddard considered atomic energy for spaceflight and believed that humans would use it to venture out of the solar system and into the Milky Way. In To the End of the Solar System James Dewar gives a strikingly detailed and vivid account of the determined efforts of many to develop the technology that could have made these adventures reality.

In 1953, Robert W. Bussard (1928–2007), at the Oak Ridge National Laboratory, wrote an influential report describing the advantages of nuclear propulsion. Many scientists were inspired by it and began studying nuclear rockets. Only two years later, government funding drove developmental research for an atomic rocket. The scientists dreamed of space stations and interplanetary travel, while the Pentagon saw efficient means of weapons delivery.

The author takes us to the halls of Congress where Senator Clinton P. Anderson (1895–1975) of New Mexico was a primary advocate and champion of the nuclear rocket program, as well as a great visionary for the space program. In 1960, he said that Congress should “adopt a flight by 1964, a manned lunar landing with them by the end of the 1960s and more nuclear rockets for extensive exploration of the solar system.” He continued saying, “The universe is nuclear and so we must use this energy source if we are to go there. If we succeed, the world will look to us as leaders and future generations will commend us because they will have access to the universe.”

The nuclear rocket development research became the so-called Rover/NERVA (Nuclear Engine for Rocket Vehicle Application) program. In October 1964, scientists “throttled” up a reactor to 55 megawatts, proving the concept of varying reactor thrust. This test put development years ahead of schedule, and forced political leaders to consider missions and flight tests for the nuclear rocket.

NASA Administrator James Webb (1906–92) saved NERVA before resigning as the Nixon administration took office. With the confirmation of James C. Fletcher (1919–91) as NASA administrator, Nixon approved the space shuttle. This decision jeopardized NERVA since it was not necessary for the Shuttle program. The author describes how Senator Anderson tried to hold the shuttle hostage if NERVA was not funded, and how Fletcher and Low worked behind the scenes to end all nuclear rocket research. With Congress out of session and the space shuttle already approved, NERVA was cut from the NASA budget. On January 5, 1973, NASA announced the end of the nuclear rocket program.

Dewar makes the case that American industry and the public benefited greatly from the $1.4 billion spent on the Rover/NERVA program. The cryogenics industry in 1950 was small and products were expensive. Through government spending, new methods were developed to produce liquid oxygen and hydrogen as well as the pumping and piping capacity to transport them. Further, as a direct result of the nuclear rocket effort, George Grover at Los Alamos Scientific Laboratory developed the heat pipe that helps maintain uniform temperatures in many electronic components, manufacturing processes, and computers. At the height of the Rover/NERVA program, 8,000 Americans were employed in well-paying jobs creating technology, equipment, processes, and knowledge that benefited the entire country. However we use these benefits, the author believes, “we’ve been given our knowledge of the atom for a purpose and it’s not to destroy but to leave this planet permanently and if there’s sin involved, it’s in not doing so.”

To the End of the Solar System is a comprehensive description of the technical details of the development and testing of the nuclear rocket, built by ingenious scientists. It is also a history of the dramatic politics and world events that initiated its funding, drove its course, and ultimately sealed its fate. Dewar makes the highly technical subject of the nuclear rocket easy and enjoyable to read, while ably giving it a proper historic perspective. If you believe that your knowledge of America’s space program is complete without reading this definitive reference, you are mistaken.