Book Review: Touching the Face of the Cosmos 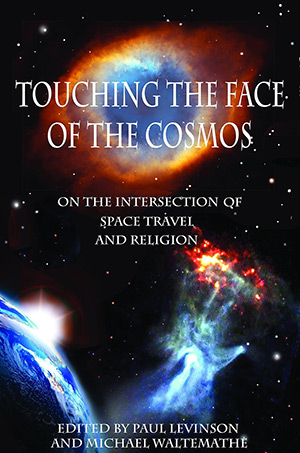 My mother always told me, “Never discuss religion and politics at social gatherings!” This book goes where others may fear to tread by presenting an anthology of essays and science fiction stories exploring the intersection of space travel, spiritual philosophy and religion. The editors set out to provide a variety of ideas and viewpoints on the subject. Most of the book is from the Christian perspective with a smattering of other religions included (there is one entry from the perspective of Taoism and three from Judaism). The original “call for papers” included solicitation of papers from a non-religious perspective, but none are in the final product. There is an occasional swipe at both fundamentalism and atheism.

The book is divided into two parts. The first half consists of essays which explore topics such as how space travel affected astronauts’ spirituality, how religious reasons could provide a future impetus for space travel, how intelligent alien species might affect our view of our place in the universe, and even how space travel could be a form of pilgrimage. Each essay includes an author biography, a bibliography, and extensive links to articles for additional reading.

The second half of the anthology consists of religious-themed science fiction stories because “much of our thinking about space has come from fiction.” They include both near future space colonies and far flung alien civilizations that explore how space colonization might influence our beliefs and challenge their foundations.

Readers who wish to explore the implications of space travel on Christian and personal spirituality will find much in this anthology to contemplate. Throughout there is a general positive view of all religions and that space travel will strengthen spiritual beliefs. There is a slight repetition among some of the papers, such as when providing descriptions of the affects of space travel on astronauts’ spiritual views. However, almost all of the papers and stories are easy to read. NSS members will also discover some suggestions for engaging the religious community in support of space travel.

There are also some surprises, such as similarities between religious pilgrimages and space travel. I now wonder whether I’m performing a sort of pilgrimage during the many times I’ve taken my family to Disney World for vacation and carved out one day for us to visit Cape Canaveral. Also, I had never considered the premise of one paper which calculates that, if God wished to provide a savior for each alien intelligent race, there would be over 400 versions of Christ in the universe simultaneously (I seemed to have missed that in the Drake equation!). But overall, the papers are informative and thought-provoking, and the science fiction stories unique and entertaining. Readers will find at least a few concepts that will stay with them long after the anthology’s conclusion.

Below is an annotated list of essays and stories in this anthology.