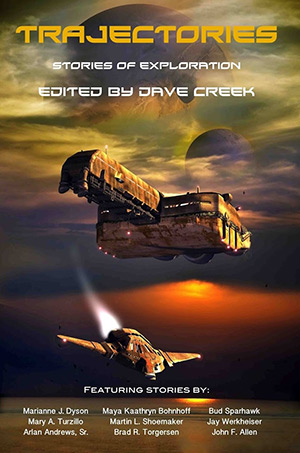 The stories in this anthology span the range from near-Earth, near-future adventures to far flung aliens battling in other galaxies. And they go from hard science space action to situations that include mystical and fantastical elements. The stories are excellently written and explore many aspects of space activity: exploration, supply runs, colony ships and terraforming. And, as in good science fiction, the tales also include the human and societal reactions to the situations. NSS members will find many of these stories entertaining and thought provoking about what could arise as we move off our planet.

The Breath of Mars by Marianne J. Dyson.

A shuttlecraft to Mars crashes in a ravine, and an ultralight pilot also crashes when trying to assist. The rescue rover is hours away and can only reach the top of the chasm before the survivors’ oxygen runs out. Can they climb out in time while carrying the injured, especially when one can barely walk and has a punctured suit?

A blue-collar worker heads to a moon of Jupiter to create an outpost. The pay seems great, and when he arrives the project managers detail the plan. The construction pallets and supplies have already left on timed trajectories, and the managers say they have accounted for all contingencies. There is no time for questions; the worker needs to get going since nothing can go wrong. Oh, sure!

A Matter of Timing by Maya Kaathryn Bohnhof

Picture this: a few aliens in a bar on a far away planet are sharing their problems. One laments that he has four daughters marrying at opposite ends of the galaxy at the same time. Sal Pal, a renowned story teller, says, “Just go out and buy some time.” When the others express extreme doubt, Sal launches into his tale of working for the Supra-Glu empire and helping the monarch Gobbitz the Large out of a very sticky situation by buying time.

Seeds by Mary A. Turzillo

Annie, a somewhat flaky rich twenty year old on Mars, constantly invents schemes for adventures, whether it is surfing the rings of Saturn or heading to the Kuiper belt to snag an object. She convinces her friend Kapera to fund a starship that will seed another solar system with people. Annie just happens to own a dilapidated ship they can use. All they need do is to load the ship with eggs, sperm and incubators, and upload both of their personalities into robots who will act as nursemaids. The somewhat hilarious tale of their robotic personalities handling of the situation ensues.

One of the microwave beaming stations at the L4 LaGrange point receives an urgent message from Earth’s first starship, the Mayflower. They are being bombarded with radiation from the beamer. If the beams are shut down, the ship’s trip will be extended by years, and the race is on to locate the problem. The story is an exciting but complex mix of physics and paranoia when they also suspect a saboteur.

Trajectories of the Heart by Arlan Andrews, Sr.

The pilot of a 1-man supply ship to the Moon is jolted by a crash which sends his damaged ship careening off course. This story is a combination of science and mysticism as the pilot attempts to use both to save himself.

The Adventures of Star Blazer by John F. Allen

What happens when a man involved with a 1950s sci-fi Star Blazer production gets whisked away to an alien galaxy? Why, he must help in the battle against other evil aliens. If you’re a fan of the Guardians of the Galaxy movie, this tale will strike a chord.

In Its Shadow by Martin L. Shoemaker

An alien civilization has grown up around a giant impenetrable sphere that has been on their planet since their ancient days. I couldn’t help thinking this was similar to the Monolith in the A. C. Clark 2001 novel. But now, the aliens’ physics has progressed far enough that they might decipher the sphere’s secrets. Science and religions clash as to whether they should attempt to probe the sphere, with interesting results.

The Ghost Conductor of the Interstellar Express by Brad R. Torgersen

An overcrowded and polluted Earth sends a colony ship to another solar system. Unfortunately, the new planet is uninhabitable, and so the ship’s residents begin terraforming it. They train and send young pilots to capture objects from the system’s Kuiper belt to bombard the planet. But when one pilot disappears in deep space without a trace, his sister is determined to follow in his footsteps to locate him, no matter what may be out there.