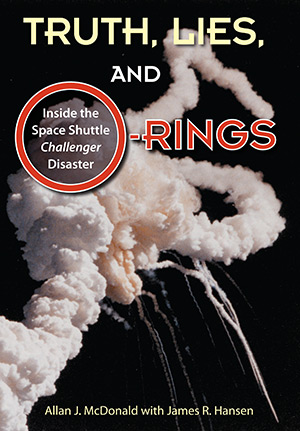 Truth, Lies, and O-Rings tells the story of what caused the loss of seven brave and dedicated souls aboard the Space Shuttle Challenger. The author and National Space Society member Allan J. McDonald was the director of the space shuttle Solid Rocket Motor (SRM) program, and was in the launch control center when Challenger was lost. With the help of James Hansen, author of First Man: the Biography of Neil Armstrong, he gives a gripping account of what led to the failure of the Morton Thiokol Inc. (MTI) SRM, the following investigation, and the first flights of the successful, redesigned SRM.

McDonald, a highly accomplished rocket engineer, describes in exacting detail the design, testing, and functions of the solid rocket booster. McDonald thoroughly analyzes the engineering behind the joints, O-rings, and propulsive gas seals, making it easily understood by any armchair rocket scientist.

There is more to this book that will appeal to the amateur engineer and policy-maker in every space enthusiast. Even though we know the cause of the accident, the outcome of the investigation, and the glory of the space shuttle’s return to flight, Truth, Lies, and O-Rings reads like a thriller novel. But this narrative is true, and it tells the inside story of the decisions leading to the accident and the actions of a man who told the truth even in the face of overwhelming pressure and deceit from superiors.

SRM O-ring inspections had shown many instances of erosion or soot blow-by of the primary O-ring since STS-2 in November 1981, including STS-61C in early January 1986. The prevailing theory at the time was that the O-ring anomalies were a known quantity and launches could continue since nothing bad had happened yet.

At the flight readiness review the night before launch, MTI recommended not launching below 53°F since the O-rings had not been qualified below that temperature. NASA officials aggressively disagreed with the MTI no-launch call, at which time MTI executives and engineers caucused offline at headquarters in Utah. MTI managers bent to NASA pressure and recommended launching Challenger the next morning: January 28, 1986. Allan McDonald did not agree with the change of recommendation and told NASA managers, “If anything happens to this launch, I wouldn’t want to be the person that has to stand in front of a board of inquiry to explain why we launched this outside of the qualification of the solid rocket motor or any shuttle system.”

McDonald was devastated by the Challenger explosion and loss of the crew, but he quickly applied his efforts to help determine the cause. On February 3, 1986, President Reagan formed a Presidential Commission to investigate the accident. The commission was chaired by William Rogers and included, among others, Neil Armstrong, Dr. Richard Feynman, and Dr. Sally Ride. As the Rogers Commission probed the causes of the disaster, NASA misinformed and in some cases lied to its members. When the managers continued their obfuscation, McDonald was forced to stand-up, like a lone ranger, and interrupt the Commission proceedings to present truthful and accurate details.

The Rogers Commission members were stunned when he told them, “The recommendation at that time was not to launch below 53° Fahrenheit…” That statement commenced the real Presidential Commission’s Challenger investigation. His testimony, along with the testimony of several other MTI engineers, uncovered the depth of the management problems and the broken safety culture at NASA. But the drama did not end there. MTI punished McDonald for speaking out about the O-ring problems. As a result, legislation was introduced in Congress to prevent retribution for providing information to the Rogers Commission.

Although several other engineers left the company, McDonald stayed, leading the redesign of the SRM which returned the space shuttle to flight with the launch of Discovery STS-26R on September 29, 1988.

Amazingly, as if reading a Hollywood script, this story unfolds with one bad decision, failure, or lie after another. The misinformation campaign by some at NASA and MTI almost succeeded in covering up the actual causes of the Challenger disaster. Thankfully, in Truth, Lies, and O-Rings, we have found some real American heroes who laid their professional and personal reputations on the line to bring us the truth, return honor to our space program, and launch the space shuttle on a new age of exploration.