Book Review: Turning Dust to Gold: Building a Future on the Moon and Mars 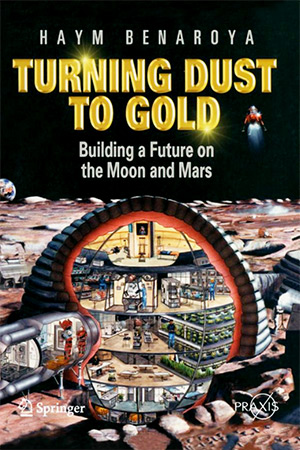 Haym Benaroya, a professor of mechanical and aerospace engineering at Rutgers University, has been a leading proponent of lunar bases and settlements and is also editor of the collected papers from the 2007 Rutgers Symposium, Lunar Settlements. Published just two months after Lunar Settlements, Benaroya’s book Turning Dust to Gold: Building a Future on the Moon and Mars is also mostly about the Moon. Although Mars gets just one chapter and not much detail, the future lunar economy is discussed in the context of a wider space economy that includes Mars.

Benaroya states up front that “the goal of this book is to demonstrate that expanding our civilization to the Moon and beyond is not beyond our reach, intellectually or financially.” Does it succeed in this goal? I would say only partly, as discussed below. The book gets par for the course.

The book is a well-referenced and valuable compilation of good ideas. There is a significant amount of material on technology aspects, particularly habitat design, but what impressed me most was the book’s willingness to tackle the much more difficult questions about economics, some of which was in much more detail than I have seen in any other book.

The book is written as a “future history” from the perspective of an author born and raised on the Moon and writing in the year 2169. However, this actually plays a minor role in the book, so those who do not like a future history style will find it does not interfere, and those who do like this style will find it adds some interesting tidbits. The bulk of the book still consists of a standard expository format, and the bulk of that material describes studies of lunar bases and settlements done in the first decade of the 21st century. The book is really about creating the future rather than predicting it.

One of the “predictions” was made obsolete literally while the book was in press. The book’s future history stated that the Vision for Space Exploration’s Constellation program was a successful precursor for lunar bases and settlements, but the Constellation program was cancelled during the time the book was being printed, clearly demonstrating the hazards of making predictions. The main themes of the book were not really affected by this, however.

The one aspect of the future history that I would call into question was the start of construction on a prototype space elevator for Earth in 2046. I regard it as unrealistic to speculate on a timeline for something that is so far beyond current technology. However, as a literary device to create an excuse to describe space elevators and their potential (an important topic), it served its purpose. The rest of the book sticks with known technologies (with the exception of Helium-3 fusion, noted below).

The title of the book, Turning Dust to Gold, reflects the book’s emphasis on economics. How can lunar or other space settlements become economically viable? In other words, how do we turn regolith into money? This is indeed the crucial question, since no space settlement can remain physically sustainable unless it becomes economically sustainable.

In tackling this question, Benaroya advocates three basic approaches: (1) A strong partnership between government and the private sector, with the private sector taking over as soon as possible. (2) Dual-use technologies, whereby technologies developed for lunar bases and settlements are incorporated into products for use on Earth whenever possible to help pay back development costs (several pages of tables listing possibilities for these are presented). (3) The earliest possible use of in-situ resources to make products that can reduce costs and generate revenues. As a fourth major element, space tourism is identified as playing a significant role.

Although many lunar products are suggested, Benaroya indicates the most important during the early decades would likely be oxygen and propellants. He even goes so far as to analyze the selling price of lunar propellants given varying assumptions about what portions of the total cis-lunar transportation system are subsidized by government. One interesting idea presented is using a lunar mass driver to launch sifted regolith into lunar orbit where it could be used directly as fuel (reaction mass) for mass-driver powered spacecraft bound for Mars or elsewhere. During later decades, beginning around 2070, Benaroya presents Helium-3 as being the true “golden dust” that vastly improves the economics of space settlement. Despite this reference to the book’s title, the whole topic of Helium-3 fusion power was not discussed in any detail (for that see Return to the Moon by Harrison Schmitt).

To be honest, I find Benaroya’s economic scenarios less than totally convincing. As just one example, lunar-produced propellant would certainly be of significance, but it is impossible at this time to predict if the market for that product would ever be large enough to meet the production cost. However, to criticize the book for not closing the business case for lunar settlement would be grossly unfair, as that would be asking too much of any book. All we can really ask of such a book is that it points us in the right direction, and I think this book does do that.

Interspersed throughout the topics in the book are (1) interviews of people ranging from the famous (such as Neil Armstrong) to little-known space workers in a variety of fields, and (2) a variety of documents such as presidential speeches and, it turns out, a complete copy of the NSS Statement of Philosophy! Of the National Space Society, the book states (pp 77-78):

One organization that provided a venue for education and discourse was the National Space Society, which continues to this day [in the year 2169] to support a spacefaring society in many ways…. Since the early days of space it has evolved into an organization that dedicates itself to furthering the goals of those who have inhabited the Moon, Mars, as well as the outposts on the asteroids and moons of the Solar System.

For that statement, the book gets extra points!