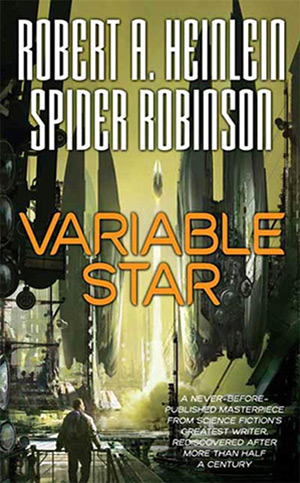 Spider Robinson states the problem for the reviewer up front when he asks, “Should this work be judged by the standards used for art by the living, or for art by the dead?” What the reader faces is a modern science fiction author and fan of Robert A. Heinlein (RAH) writing a “lost” novel based on notes by the Old Man himself. The plot is perhaps 90% Heinlein. RAH wrote this outline, titled The Stars Are a Clock, in 1955 but never came up with an ending. Or at least the ending didn’t appear in Heinlein’s notes. What Robinson had to work with was seven pages of an outline to an unpublished and (as far as anyone can tell) unwritten novel.

Is the story Heinlein’s, or Robinson’s?

Unquestionably the plot is Heinlein’s. Based on how some of the characters interact, one can see that certain turns of phrase might be Heinlein’s (how many SF writers today would allow their character to be nicknamed “Stinky?”). Also, one can find references to LeCroix, the first man to land on the Moon in Heinlein’s “alternate history,” as well as Nehemiah Scudder, the “Prophet” of the theocracy that Heinlein speculated would take over America.

And yet overlaid upon this story is Robinson’s own 21st century sensibility, including profanity, politics, and slang. “Googling” was not in the Heinlein argot, even when he passed away in 1988, though one can easily imagine him using the verb if he were alive today.

Truth be told, as I was reading this, I was recalling another author and another story altogether: Harlan Ellison’s short story, “Jeffty is Five,” where a guy has a childhood friend who never grows up and who also, mysteriously, has a radio playing new episodes of Superman and The Shadow and has comic books discussing current-day events. It was strange, but wonderful. Variable Star is Heinlein raised from the dead. And yet it’s not.

To get to the story itself, we find a typical Heinlein juvenile hero, meaning that he is a hero one might have encountered in one of the books RAH wrote for a juvenile audience in the mid-1950s. Joel Johnston, a native of Ganymede, is an aspiring musician who suddenly finds out that his girlfriend is the daughter of “the wealthiest man in the solar system.” Unable to deal with her lies or her family’s expectations of him as heir apparent, Joel decides to join the crew of a starship on its way to colonize a planet in another solar system. While we can only guess that it is like the “Universe” ship described in Heinlein’s tale by the same name, we are given few details about the ship’s exterior or interior arrangement. The colony, Brasil Novo, shortened to “Bravo” by its Anglo colonists, carries 500 people and travels at nearly the speed of light. The crew is mostly young and expected to be in good enough shape to colonize the planet when they reach the other end of the journey.

Our hero bounces from regret to healing to acceptance in the shipboard community as he strives to get over his “escape” from the uncomfortable situation he left behind on Earth. His talent as a musician provides one inroad, while his experience as a farmer on Ganymede provides the other. (One can perhaps get an idea of Joel’s background by reading Heinlein’s “Farmer in the Sky.”) Joel’s recovery process, helped along by the ship’s psychologist, incorporates aspects of Zen Buddhism and yoga, perhaps anticipating the ‘60s’ infatuation with Eastern mysticism.

It was just that sort of semi-anachronism that made the English major in me observe or merely speculate on whether a particular touch was Heinlein’s or Robinson’s. Some items are obvious, like the references to 9/11 or the War on Terror or Robinson’s cleverly veiled appearance by Larry Niven and Jerry Pournelle, both Heinlein protégés. An interview with the author might be revealing on that score, but no doubt Robinson would just turn around and ask, “Yeah, we can discuss literary theory all day, but did you like the story?” And in answer to that query, I would reply yes, I did. I enjoyed it so much that I found myself laughing out loud in several places, either through the situations Joel found himself in or the way his narrative voice described them. Variable Star is fun, in the way Heinlein juveniles were meant to be.

Why should this book matter to space advocates? Heinlein was one of the first and best advocates for exploring and settling the solar system. Robinson quotes RAH himself under his pseudonym “Anson McDonald,” when providing the best justifications for doing so: “We need to have as many baskets for our eggs as possible. Even if we don’t manage to ruin this planet ourselves, natural disasters or changes — or even changes in our star — could make it impossible to live on this planet.” Settling our solar system is merely the first step, eventually we will need to reach out to the stars. Heinlein also had a talent for believability, clarity, and readability that is sometimes overlooked in the rush to convict him as a sexist, fascist, militarist, or hedonist. Robinson maintains a noisy good humor throughout the story, and the voice blends nicely and realistically with Heinlein’s. The language and some of the situations may be a bit spicy for kids under ten, but the rest of the story is standard adventure fare.

So before you pick up Variable Star, try this little experiment: read “Jeffty is Five” by Harlan Ellison first, and then start reading Variable Star. You might not be reading pure Heinlein, but you’d almost swear you were.