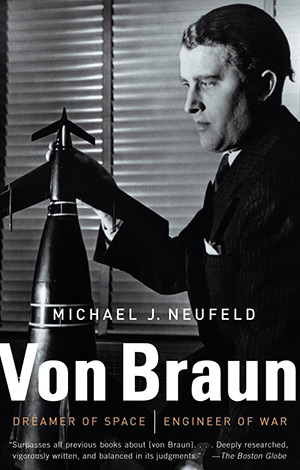 How do you capture the soul of a man with the reputation of a modern-day Faust? In his new book, Von Braun – Dreamer of Space, Engineer of War, Michael Neufeld trods that familiar ground once again, but with a twist. He argues that rocket pioneer Wernher von Braun more closely resembles Goethe’s Faust, who uses his infernal powers to build engineering works for what he believes is the betterment of mankind, than the classical tale of the man who sells his soul in return for earthly powers and pleasures.

With this theme in tow, Neufeld traces the trajectory of the charismatic engineer’s life in unprecedented detail. The result is a meticulous (it has nearly 1,000 footnotes) if somewhat pedestrian cradle-to-grave account of von Braun’s life and work. His pivotal role in the evolution of rocket design and development is explored exhaustively. Indeed, the sheer volume may turn off some readers. Still, quantity has a quality all its own.

The author’s efforts are successful mostly, especially when he recounts vignettes from von Braun’s life—such as meetings with such assorted figures as Adolph Hitler and Walt Disney.

Slightly less successful are the author’s attempts at psychoanalyzing his subject. It is a task made all the more formidable by the complexity of von Braun. By the time of the Moon landing, Normal Mailer could credibly claim von Braun was a “man of opposites…a confusing aura of strength and vulnerability, of calm and agitation, cruelty and concern, phlegm and sensitivity.”

He was, in fact, many things, often all at once. He was charismatic to be sure, but also shrewd and naive. He was an optimist in a pessimistic age. He was a technologist and first-rate manager of vast engineering projects, but he was a political animal of the first magnitude too.

Von Braun arose from a conservative Junker family to master a revolutionary technology yet took a pragmatic, conservative engineering approach.

He not only survived but prospered and played major roles in Hitler’s twisted Götterdämmerung and, 20 years later, John F. Kennedy’s Camelot.

Neufeld explores these contradictions and facets of von Braun’s life and work and gives full voice to his critics and admirers. Among the former, von Braun was, at best, an amoral opportunist, whitewashed by his American masters. At worst, he stoked the “fires of hell” through an “implicit bargain” with the Nazis to secure money for rocketry, to have a career, and even to keep himself out of danger.

Later von Braun and his rocket team would labor in the desert for the U.S. Army. Intriguingly it is there that we glimpse von Braun’s growing moral self as—incongruously—the son of a Lutheran Junker gravitates toward the “welcoming inclusiveness of American evangelical Protestantism.”

In the desert, von Braun wrote, “My God, my need for war is…fundamentally satiated.” Under the blistering Southwest sun, von Braun came to see religion as an antidote to the dilemmas of technology; only a religiously based ethical code could control the evil that humans could unleash with their hard-won knowledge.

However, for the critics, the ritual cleansing power of the White Sands desert could never sever the link with von Braun’s Nazi past. As the Cold War consensus of the 1950s and early 1960s faded, von Braun was subject to the barbs of liberal intellectuals and artists (Mort Sahl’s oft-repeated line, “I aim at the stars, but sometimes hit London”) as well as an East German misinformation campaign.

The voices of criticism would grow louder over time, but the momentum of the space race and legions of devoted admirers insulated him from the worst of it.

Still, he could never shake the Faustian tag despite the fact that the sins of Goethe’s Faust were those of commission resulting from contemplation and free choice. Although probably not intended, Neufeld’s extensive work also allows a more charitable interpretation of von Braun as a young man—steeped in the Junker tradition of nationalism and order—who saw no other option but to bargain with the state.

Ironically, however, it was von Braun’s “bargain” with the political realities in Washington that were the source of his greatest frustration. In detail, Neufeld recounts how von Braun’s plans for a large space infrastructure were shelved in favor of a quicker and cheaper route to the Moon.

It is no surprise then, Neufeld writes, that as the Apollo program ended, von Braun’s “world was falling apart.” The exquisite machines and, worse, the managerial infrastructure he had created were dismantled. He had—in Oscar Wilde’s words—suffered both of life’s tragedies: “not getting what one wants and…getting it.”

Yet for all that, von Braun remained an optimist. One of his last acts before his death in 1977 was creating the predecessor of the National Space Society. In the end, readers of Von Braun are left with an imperfect but rich portrait of its subject, which allow those so inclined to draw their own conclusions about an extraordinary life.