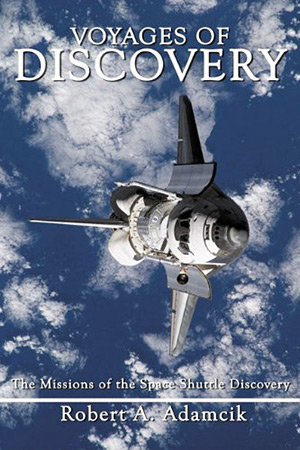 The author describes missions one through thirty eight in exacting detail, helping to bring the exiting accomplishments of these voyages to life. Discovery’s maiden flight is memorable not only for the first launch of the new orbiter, but also because it had the first on-pad launch abort. The space shuttle main engines ignited, and because of an apparent fuel valve malfunction, they shut down, leaving Discovery swaying atop the fully-fueled external tank. Further, after launch on August 30th 1984, the recovered SRB’s showed the so called “blow by” of the O-rings for the first time, which could have alerted NASA to the coming tragedy of Challenger.

Two of the most important launches of Discovery were the “return to flight” missions after both the Challenger and Columbia disasters. Both of these flights helped put NASA’s human space operations back on course. Discovery also contributed greatly to the science objectives of the U.S. Space Program. In April 1990, many of us remember the exultation we felt when the Discovery crew deployed the Hubble Space Telescope (HST), before learning of the spherical aberration in its main mirror which blurred the vision of this important tool. In October 1990, the Ulysses probe was deployed from Discovery into a polar orbit of the Sun to gather prodigious amounts of solar data.

The orbiter returned to the HST in February 1997 for the exiting second servicing mission, and again in December 1999 for its third servicing. Both servicing missions improved and extended the capabilities of this great national resource. The third HST flight was also the last shuttle launch of the 20th century. Another ‘last’ for Discovery was the ninth and final shuttle mission to the Mir space station in June 1998.

The most flown orbiter had many other memorable journeys including rides for U.S. Senator Jake Garn, Saudi Arabian Prince Al Saud, and the oldest astronaut and first American in orbit, John Glenn.

The author adds entertainment to the stories by recalling Discovery’s interactions with nature. In May 1995, Northern Flicker woodpeckers poked 200 holes in the external tank’s insulation. In March 2009, a Free Tail bat hitched a ride clinging to the ET.

Discovery flew the second International Space Station (ISS) construction mission in May 1999. Flights to ISS continued for more than a decade and have resulted in a fully operational orbiting laboratory.

Each of the missions of NASA’s flagship orbiter are covered chronologically with every experiment, satellite deployment, and other major objective described in detail. If you want to know what time the third spacewalk of STS-116 commenced, it can be found in this book.

While this work is very exacting in its mission descriptions, it suffers from numerous typographical errors that slipped by the editors. It is also unfortunate that the 39th and final flight of Discovery is missing from this volume. On March 9, 2011, Discovery and its crew came to wheels stop at Kennedy Space Center for the last time.

In the end, Space Shuttle Discovery will be retired to a place of stature in one of America’s hallowed museums. The awe inspiring and historic Voyages of Discovery will endure through the descriptive work of author Robert Adamcik. This book would be a nice documentary resource for anyone who has witnessed a launch or landing of Discovery, and an enjoyable read for all other space enthusiasts.