Buzz Aldrin "Dances to the Stars"

The National Space Society wishes Apollo 11 astronaut, and NSS Governor, Buzz Aldrin, great success in his latest adventure. As the next installment in his tireless efforts to raise public awareness of and support for the future of our nation’s space program, Buzz is trading in his moonwalking shoes for dancing shoes. By participating in the new season of Dancing with the Stars, Buzz (and the National Space Society along with him) will have a national audience, and a national stage from which to speak.

“My primary motivation for joining the show is to help bring NASA and the U.S. human spaceflight program to the front of popular consciousness. Until there’s a spectacular success or failure, the space program is not on everyone’s lips,” Aldrin says. “Dancing with the Stars has an audience of millions of followers and it would be great if those viewers became supporters of our space program. I’m hoping that all of my old friends and colleagues in the space community can tune in and cast their vote for the octogenarian on the dance floor!” 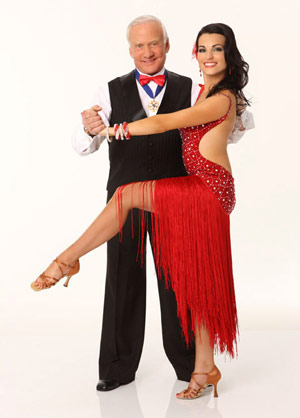 As long as Buzz remains a contestant on the show, he will be able to engage every American household in the debate about the importance of space exploration, development, and settlement to our nation’s future. Please support Buzz in his efforts to pump up public support for a new direction outward for America’s human space program.