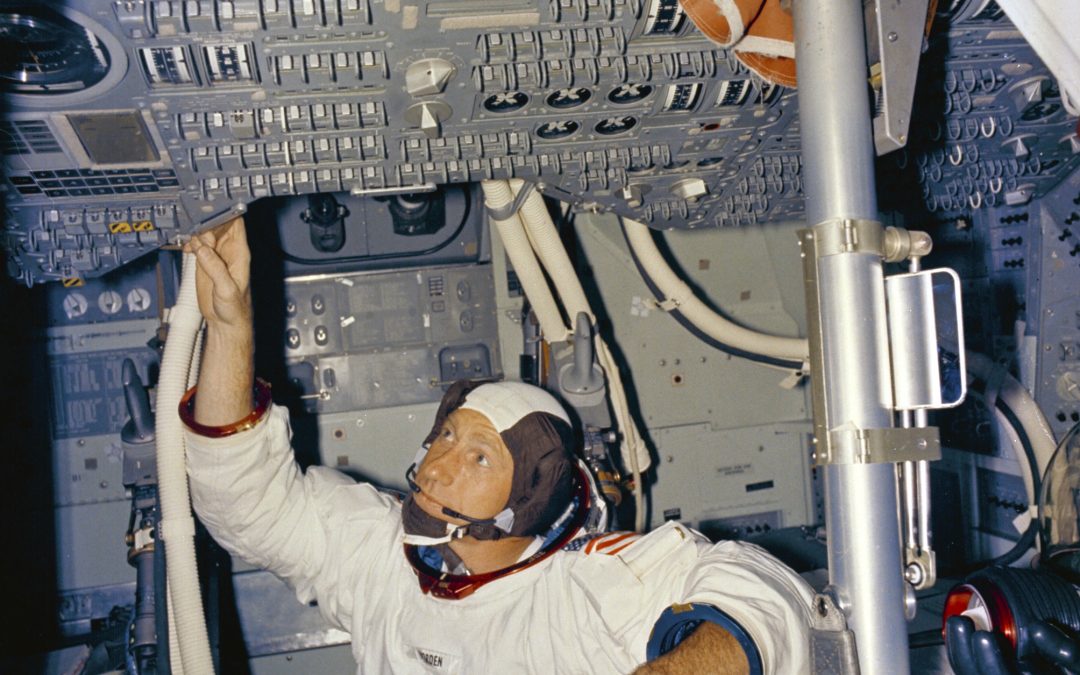 This post will spotlight two books that defined one sub-genre in spaceflight literature – the astronaut autobiography. These autobiographies are listed in chronological order, by publication date. While it would be impossible due to space and time constraints to list every astronaut memoir, these titles are often cited as having inspired other astronauts and spaceflight personalities in his or her own storytelling endeavors. (Click this link to read last week’s post, which discussed two early 1970s entries into the canon.)

The preface to Walt Cunningham’s 1977 opus, The All-American Boys, opens with this paragraph: “Writing a book is an unusual experience. It makes people nervous, especially those being written about. Shortly after publication of the first astronaut-authored book I received a call from the Astronaut Office. I could almost hear the caller’s pulse throbbing at the other end of the line. ‘We have a copy in the office, but the boys are half afraid to open it. I hear it tells everything. I sure hope your book isn’t going to get into a lot of that gamey stuff.’” Well, Cunningham’s book did get into a lot of that gamey stuff – and we loved it. In the same preface, the Apollo 7 astronaut declared that the “super-hero astronaut” image, in fact, was a well-crafted, curated lie of sorts: “Some even cultivated the image, but few could measure up to it. Most of us recognized it was unlivable only slightly before we realized we were stuck with it for the rest of our lives.”

In 1970, former Major League Baseball pitcher Jim Bouton released a book called Ball Four, which was a diary of his 1969 season interspersed with memories of his time with the New York Yankees. This book tore apart the baseball community upon its release, as it revealed secrets of the clubhouse that had been long suppressed. For example, it depicted baseball hero Mickey Mantle as being a womanizing drunk, and uncovered how drug use – particularly amphetamine use – was rampant within the players’ ranks. Some were scandalized by Ball Four, but many saw Bouton’s testimony as what the public needed to hear: that when you peeled back an image, sometimes you got more image – or something even more unsavory.

Why am I discussing a baseball memoir? It’s because The All-American Boys functioned as the Ball Four of the space community. Here, Cunningham begins his memoirs with a searing depiction of the Apollo 1 fire. Once the reader has emotionally recovered (somewhat) from that, Cunningham recounts his astronaut career from 1963 selection to its rather ignominious end in Apollo Applications/Skylab, after he was forever associated with what was called the “Apollo 7 bitch circus” (even though he was largely a compliant crew member during that mission, unlike his two colleagues, Wally Schirra and Donn Eisele). Indeed, the Apple TV series For All Mankind drew some inspiration from The All-American Boys when its NASA briefly relegated its archetypal astronaut hero, Ed Baldwin, to a dead-end desk job at Apollo Applications after a press interview gone terribly wrong.

The best parts of the book are when Cunningham spills the tea all over the reader entirely, and completely whips the “American hero” veil off some of his colleagues, and in turn, off NASA’s human spaceflight program. We find out that many of his colleagues weren’t faithful spouses, and that some were difficult and domineering – a far cry from their “salt of the Earth” public image. We find out a lot about famously single-and-swinging Jack Swigert’s dating habits (page 194: “Jack had kept her [a female reporter] on the back burner for ten months, and Sunday night was the night. We could hardly wait till Monday to see if he was still alive.”). Cunningham depicts a NASA complete with pockmarks and blemishes, and doesn’t even attempt to lift the airbrush to cover its surface.

When one completes The All-American Boys, you realize the title is more than a sarcastic scoff at what NASA wanted its heroes to be – you understand that Cunningham really was depicting “All-American boys.” For better and for worse, NASA’s astronauts – despite their slick, heavily curated public veneers – weren’t immune to the social problems faced by regular Americans during the 1960s. A revised and updated version of The All-American Boys was released in 2009, and has proved to be a popular addition to any spaceflight library, as Cunningham’s tea will never fail to be tasty.

While I won’t ruin this book with spoilers for those who haven’t yet enjoyed it, Falling to Earth’s climactic point of crisis actually occurs after Al Worden, Apollo 15’s command module pilot, makes his historic trip to and around the Moon. It hinges around one day that upended his life in 1972, and he alludes to this upcoming human-versus-awful-situation conflict in the book’s preface: “That day…was the beginning of a long journey for me. As I clawed my way back to self-respect and the understanding of my peers, a sense of duty kept me from telling my painful story of disgrace and redemption. Recently, however, my feelings have changed. If I don’t tell this story myself, completely and with raw honesty, then all anyone will know about me will be an incomplete story told only by others. What really happened to me and why? It’s time for me to explain.” And explain he did, in what might be the most vulnerable, yet uplifting astronaut autobiography committed to paper.

While Brian O’Leary’s memoirs were written with the benefit of youth and foresight, Worden’s memoirs benefit from his maturity and insight into his actions nearly fifty years after the fact. We hear about his first marriage, which he freely (and regretfully) admits ended because of his inexperience at relationships and his single-minded dedication to work. He recounts, wistfully, that he wishes his Apollo 15 crew had enjoyed the closeness of Apollo 12’s friendships. You’ll laugh at some of his raunchier stories about his younger days as a test pilot, and you’ll be suitably awed by his descriptions of a Saturn V launch and a trip to the Moon. However, the book’s real jaw dropper, as mentioned before, happens just after Worden’s wildly successful role in Apollo 15 – and many spaceflight fans, including this author, were never quite the same after reading it.

It is here Worden recounts what happened during the Apollo 15 stamp affair, and we discover where the fault of the incident actually lies. These admissions by Worden are especially painful; his career publicly scuttled, he is forced to flee Houston to NASA Ames in California, where he is subjected to further indignities (the center invites Karl Henize, and then-unflown astronaut, to a “Meet An Astronaut” day – except Worden, a flown Apollo astronaut, is forced to languish out of sight). A romantic relationship in Houston comes to an end, and he’s iced out by too many of his former colleagues. He resigns his NASA post in 1975, but he’s still haunted by the scandal, and his sense of duty and propriety prevents him from discussing what he really endured for nearly 40 years.

What makes this section of Falling to Earth excruciatingly painful is that by this point in the book’s narrative, Worden isn’t just some random guy – he’s your friend. His manner of storytelling – candid and colorful – makes you feel like you’re listening to a good pal, who just happened to be an Apollo astronaut, tell you about his life and travails. So, when Worden is unceremoniously bounced from the specter (or illusion?) of perfect heroism, you feel like it’s happening to your nice, funny, cool friend, and it hurts terribly. Never has an astronaut memoir shown its hero in such a dark, sad, vulnerable place, and the effect upon the reader is incredibly moving.

Worden’s story, thankfully, has a wonderful ending. He again falls into NASA’s good graces, and regains the respect he desperately deserved years before. Following the 2011 publication of Falling to Earth, Worden – who died in March at age 88 – enjoyed perhaps the best third act ever by an astronaut. He regularly spoke at events all over the world, received awards and honors (including recognition from Guinness World Records as having performed the deepest trans-Earth EVA, and including honors from the National Space Society), and, of course, signed a great many copies of his bestselling autobiography.

The man might be physically gone, but if you want to visit him, and hear him talk, vent, and laugh, you can always open any page of Falling to Earth, and it’s like he’s never gone anywhere.

Featured Photo Credit: NASA, dated July 2, 1971. “Apollo 15 Command Module Pilot Alfred M. Worden practices alone in a mission simulator at the Kennedy Space Center in preparation for his upcoming launch to the Moon with Mission Commander David R. Scott and Lunar Module Pilot James B. Irwin. Worden will maintain the command module in lunar orbit while the other two crewmen remain on the surface for as long as 67 hours. Launch to the moon is scheduled for no earlier than July 26, 1971.”