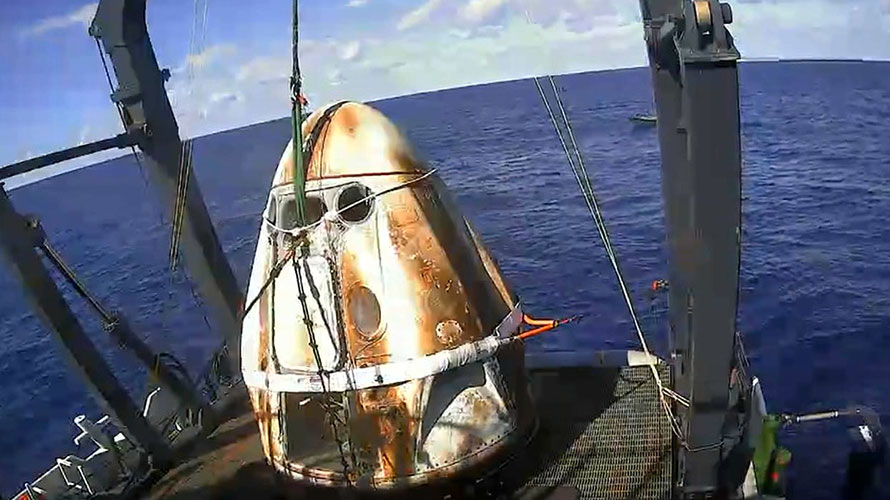 With today’s complete success of the Demonstration Mission-1 uncrewed test of the Dragon 2 crew capsule, it seemed appropriate to provide an additional update to the “SpaceX Triple Trifeta” which was last written about in the NSS Blog near the end of 2018 (The SpaceX Triple Trifecta Revisited). That article reviewed the status of SpaceX’s three ambitious goals for 2018:

Progress on these goals are represented in the graphics below (available here as a PDF).

The graphic below shows Falcon Heavy progress. Last year’s “Red Tesla Roadster” launch is shown in green, and the two planned 2019 Falcon Heavy launches in gray. With the DM-1 now off pad 39A, crews are already working to ready the pad for a Falcon Heavy launch in April, so we can expect rapid progress on this leg of the trifecta.

The graphic below tracks Crew Dragon progress, with today’s successful DM-1 shown in green, and with the planned test flights in gray. We can expect some slippage, especially in the DM-2 launch date to take account for lessons learned from the first two flights, although with the apparently complete success of DM-1, we seem finally to be on a course to complete this leg of the trifecta in 2019.

Finally, the two graphics below track progress on bringing the F9 Block 5 to operational status. This leg of the trifecta was completed in 2018, but to convey just how rapid SpaceX’s progress has been, I have provided two graphics, one showing the launches to date of Booster 1046 and the other launches to date of Booster 1048. Both boosters have flown three times each, surely demonstrating that Block 5 is more than fully operational. Booster 1048 is planned to fly a fourth and most probably final time in the Dragon 2 in-flight abort test later this year.

It is a bit hard to tell the exact status of SpaceX’s progress on flying the Dragon 2 booster seven times with the new COPVs (composite overwrapped pressure vessels), but with so many Block 5 launches already completed, and so many scheduled before the crewed test flight, it seems hard to imagine that this will be a blocking factor.

Today was a great day for SpaceX and NASA, with the Dragon 2 off to the best start possible. With all three legs of the triple trifecta well established, and one solidly in place, SpaceX is well on the way to finishing 2019 as the undisputed leader in space access technology.