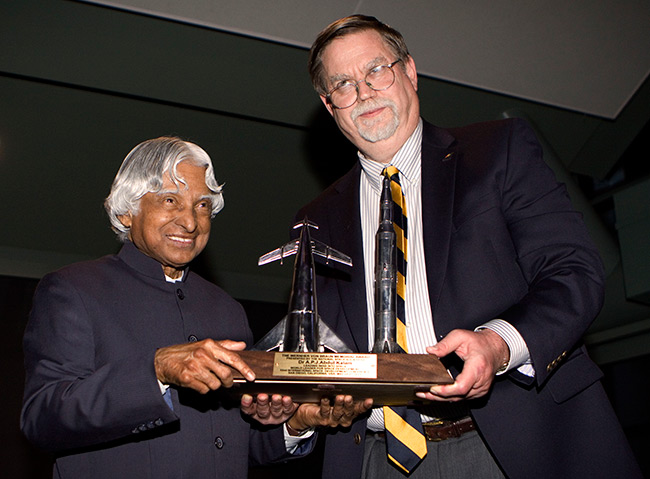 NSS Chairman Mark Hopkins presents Dr. Kalam with the NSS Von Braun award for leading India into space and for being a global leader in space development.

Dr. A.P.J. Abdul Kalam is one of India’s most celebrated scientists and statesmen and was President of the Republic of India from 2002 through 2007. An aeronautical engineer by training, he significantly advanced rocketry in India’s Defense Research and Development Organization (DRDO) and Indian Space Research Organization (ISRO). Heir to the vision of Professor Vikram Sarabhai, who set India on a course of a socio-economically oriented space program, Dr. Kalam was the man who raised India’s eyes to the stars, and raised India to join the community of spacefaring nations.

Dr. Kalam was regarded as one of the greatest minds, visionaries, and peacemakers of the early 21st century. His integrity and deep belief in everything he did registered strongly with the Indian people. Kalam was voted one of India’s two most trusted men during a period in which India deeply distrusted its politicians. He has received many honorary degrees and other honors, including India’s highest civilian award, Bharat Ratna. He is the author of many books, including an autobiography Wings of Fire.