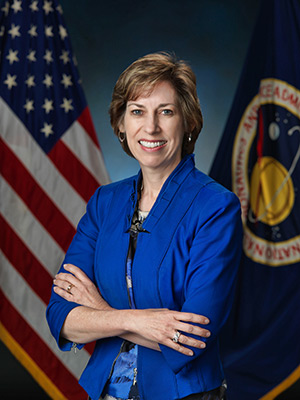 Dr. Ellen Ochoa is the winner of the Society’s 2016 Space Pioneer Award for Non-Legislative Government Service. This award recognizes Ochoa’s career serving as a professional engineer, a shuttle astronaut, the first hispanic woman in space, and subsequently in very important management positions in NASA, including her current position as the Director of NASA’s Johnson Space Center.

Ellen will accept the award on May 19 at the National Space Society’s 2016 International Space Development Conference® (isdc2016.nss.org). This will be the 35th ISDC and will be held in San Juan, Puerto Rico, at the Sheraton Puerto Rico Hotel and Casino. The conference will run from May 18-22, 2016. The public is invited to attend ISDC in order to view the award presentation.

After receiving a Doctorate in Electrical Engineering from Stanford University in 1985, Dr. Ochoa did research at both Sandia National Laboratories and NASA Ames Research Center. Her achievements include significant engineering work in optics, in information (signal-to-noise) in images, and as Chief of the Intelligent Systems Technology Branch at NASA Ames. She also served as a shuttle astronaut for over a decade, making four flights, from 1993 to 2002. Ochoa then served as Deputy Director and Director of Flight Crew Operations at Johnson Space Center, focusing on the Astronaut Office and Aircraft Operations, and later as Deputy Center Director. Then, on the first day of 2013, Dr. Ochoa became the Director of NASA’s Johnson Space Center, a position she currently holds. Johnson has been the focus for human spacecraft operations for most of NASA’s history. Dr. Ochoa’s directorship of JSC will have a significant impact on the future of human spaceflight.