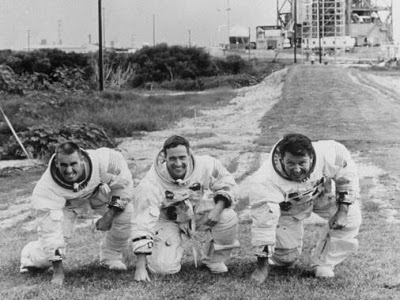 “We are all BFFs! Really!!!!!” From left, Apollo 7’s Walter Cunningham, Donn Eisele, and Wally Schirra

In October 1968, Apollo 7 was launched into space to perform some routine orbits and to test the operational capabilities of the Apollo command module. The crew consisted of astronauts Donn Eisele, Walter Cunningham, and “Mercury 7” veteran Wally Schirra. As the flight unfolded, however, the mission became less about “The Right Stuff” and more about “The Bitchy Stuff” as all three astronauts developed massive head colds, hated the food (what a bunch of divas), and began to snipe at the ground crew (and each other) on a regular basis.

One of the best exchanges between Mission Control and Schirra, who by then was in his forties and was pretty much “the crotchety old man” of spaceflight, was over some improvised changes to the Apollo 7’s flight plan. Schirra, sleep-deprived and stuffed with phlegm, lost his mind with ground controllers: “I wish you would find out the idiot’s name who thought up this test…I want to talk to him personally when I get back down. We have a feeling that some of these experimenters are holier than God down there. We are a heck lot closer to Him right now.”

Rookie Donn Eisele chimed in and added, “[These experiments] are rather ill prepared and hastily conceived.” Pretty soon the crew themselves were also snapping at each other as the command module became thick with tension, obstinance, and boogers. Standard communication between the crew and ground control became peppered with lovely, cooperative nuggets such as “I’ve had it up to here today…from now on, I’m going to be onboard flight director for these flight updates” and “We’re gonna be kind of hard-nosed here from now on” (all from Schirra, who apparently really did not want a raise in 1968).

Despite all of the complaining, nasal secretions, and nebulous goings-on between the crew and the ground, Apollo 7 overall proved to be a successful mission. However, success did not save the careers of all three astronauts. They all never flew again with NASA. In comparison, Gemini astronaut (and Navy Captain) Jim Lovell, who kept his nose clean (and, from what I have heard through the grapevine, is a very cool, nice guy), flew multiple times in the Apollo program.

Adding insult to injury, Donn Eisele, who apparently had womanizing habits and a mistress in Florida was smacked with divorce papers when he returned to Earth. His martial indiscretions, along with his behavior on Apollo 7, signaled the end of his astronautical career.

For more about Apollo 7’s “Space Scandal of 1968”, visit these vintage news clips from the Google News Archive:

BONUS! The Apollo 7 Voice Transcripts from NASA (Note: It’s over 1,100 pages, so it will keep you busy for a while)