Film: Chesley Bonestell, A Brush with the Future 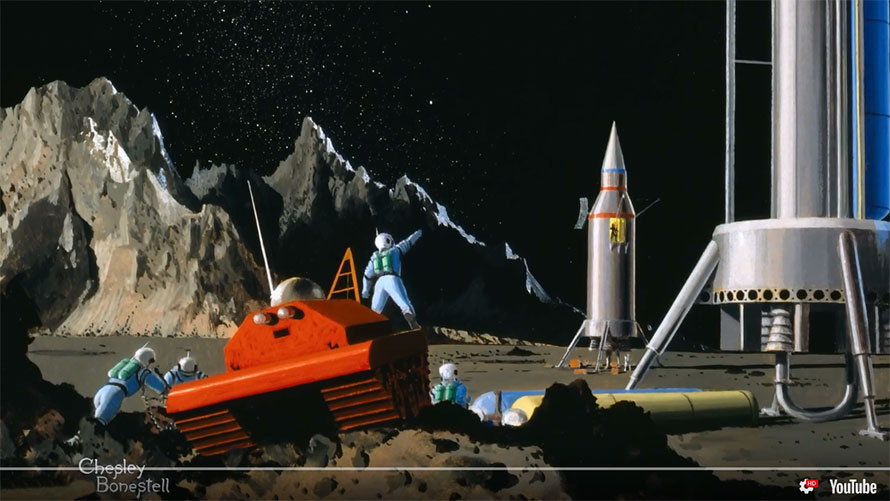 Below is a trailer and a list of special showings of the new film Chesley Bonestell: A Brush with the Future, the first-ever documentary about the “Father of Space Art” and the winner of two Best Documentary Awards: Comic-Con (San Diego) and the Boston Science Fiction Film Festival. Space artist Chesley Bonestell (1888-1986) was also an architect that worked on the Chrysler Building, the Golden Gate Bridge, and became a special-effects matte artist in Hollywood. In a 1944 Life Magazine article, his breath-taking illustrations of planets in our solar system ignited a desire in readers to explore “The Final Frontier.” His futuristic paintings went on to appear in countless science fiction magazines and books. So impactful were his illustrations that he is credited with helping to inspire America’s Space Program.

Following the screening, a Q&A will take place with Producer/Director/Writer Douglass M. Stewart, Jr. Joining him will be Co-Producers Ron Miller, renowned space artist and author of more than fifty books about art, science and space, and Melvin Schuetz, Bonestell historian and author of A Chesley Bonestell Space Art Chronology. Dr. Michael Neufeld, a Senior Curator of the Space History Department at the National Air and Space Museum, will moderate the Q&A.

A Q&A will be held after the screening with Douglass M. Stewart, Jr., Christina Dikas (Senior Architectural Historian at Page & Turnbull, Inc.), Robert E. David (Architect and Photographer), Wyn Wachhorst (Author of The Dream of Spaceflight), and Filoli’s Head Curator and Collection Manager Julie Bly DeVere. This event is open to the public. Chesley Bonestell created the designs for Filoli while working for architect William Polk. This entire property is now a part of the National Trust. Guests at this screening will receive a glass of champagne, and Chesley’s original drawings of Filoli will be on display. An added bonus is that the grounds and gardens will be in full bloom at this time of year!

Location: Vintage House 264 First St. East, Sonoma, CA 95476. A Q&A with Producer/Writer/Director Douglass M. Stewart, Jr. will take place after the screening. Joining him will be two of the film’s participants: Oscar-winning Sound Designer Ben Burtt and photographer Robert E. David. This screening is open to the public.

Additional information about this film: