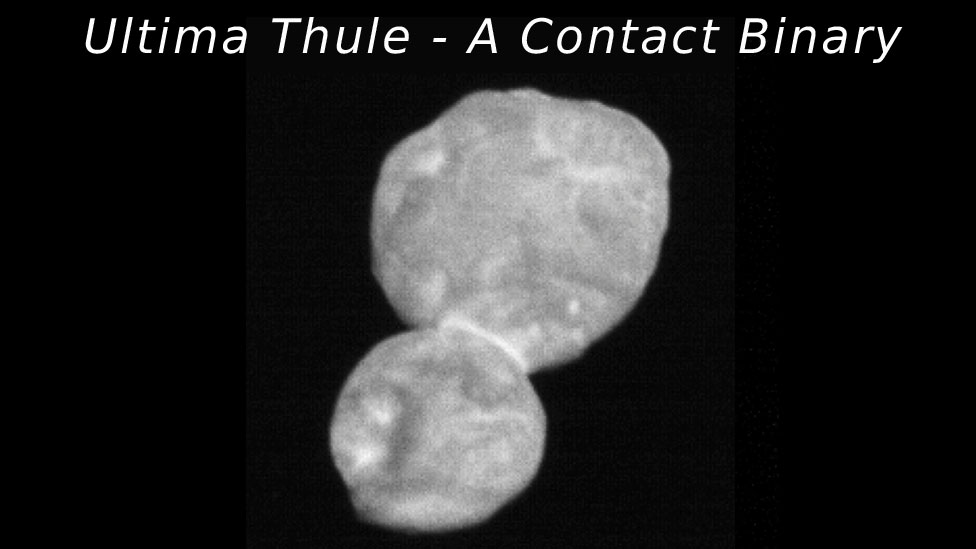 The new year opened with another first for the U.S. space program – the successful flyby by New Horizons of the Kuiper Belt Object (KBO) Ultima Thule. At the time of the flyby, New Horizons was some 6.5 billion kilometers from the Sun and 6.6 billion kilometers from Earth, making it the most distant planetary encounter to date. Speeding along at some 51,000 kilometers per hour with a one-way radio transmission time of over 6 hours, detailed planning was crucial to the flyby’s success.

The initial data returned to Earth on January 1-2 and released during the January 2 press conference provided some surprises. The biggest surprise is that Ultima Thule is a contact binary.  Consequently the larger of the two bodies has been named Ultima and the smaller of the two named Thule.

The image above was taken 30 minutes before closest approach when New Horizons was some 28,000 kilometers from Ultima Thule. An estimate of its resolution is on the order of 140 meters per pixel. The image was taken by the LORRI (Long Range Reconnaissance Imager) instrument.

Above we see the first color image of Ultima Thule. It was created by combining another LORRI high resolution black and white image (on the left) with near IR color data from MVIC (Multispectral Visible Imaging Component) to create the color image (on the right). The redness is attributed to the solar irradiation of exotic ices on the surface of Ultima Thule. The brightest surface area is in the neck that joins Ultima and Thule together.

It was only some 100 days ago that New Horizons was first able to pick Ultima Thule out of the stellar background. At that time, Ultima Thule was just a single pixel in size. By comparison, New Horizons was able to see Pluto while still a year away from that flyby. Ultima Thule, which means beyond the known world, received its name in a public vote. Its formal designation is 2014 MU69 and is assigned the minor planet number 485968.

The day before the flyby,  LORRI captured the image shown above. In this image Ultima Thule is only 5-6 pixels across and has an image resolution that is on the order of 5.5 kilometers per pixel. The image suggested that Ultima Thule had an elliptical or bilobate shape – as shown below.

LORRI (Long Range Reconnaissance Imager) is the panchromatic high resolution imager that was responsible for capturing the detailed images of the surface of Pluto.

The ability to capture high resolution images is a function of both the camera’s design and distance from its target.  The best images returned from the Pluto encounter were on the order of 80 meters per pixel and were taken when New Horizons was approximately 15,000 kilometers from Pluto. By comparison, the equivalent panchromatic camera on the Landsat 8 earth observation satellite, which orbits some 700 kilometers above the Earth, captures images with a resolution of 15 meters per pixel.  For details about the image of Pluto shown above,  see New Horizons’ Best Close-Up of Pluto’s Surface.

Ultima Thule was a more challenged target for the New Horizons team than Pluto was because of the unknowns.  A margin of error in its orbital parameters meant that mission planners couldn’t be 100 percent certain of its precise position – which could result in instruments, especially LORRI, missing the target.  Obviously, the New Horizons team nailed it.

Ultima Thule is also another 1.6 billion kilometers further away from the sun than Pluto meaning lower light levels.  There is also the question of the local environment in terms of debris fields and perhaps co-orbiting satellites. Lastly, New Horizons is now three and a half years older than it was when it flew by Pluto in July of 2015 so has less power available – which makes power management more challenging.

If all goes as planned, the best images of Ultima Thule will be some 200 pixels across with a resolution of around 140 meters per pixel. Given that it will take some 20 months to return all the data New Horizons collected during the flyby, it will be some time before we have a complete understanding of this Kuiper Belt Object based on the observations made during the flyby.

One thing that should be clear to all those who support a human expansion into space is that a detailed and thorough understanding of planetary conditions and processes is critical when it comes to successful mission design. This importance is even more critical with respect to employing ISRU (In Situ Resource Utilization) to enhance the sustainability of human outposts. As the nature of local resources and their accessibility varies widely from one planetary body to the next, ISRU and habitat designs will vary to maximize their efficiency with respect to the local environment and availability of native resources. For example, understanding the viscosity of H2SO4 in the atmosphere of Venus and its abundance in Venusian sulfric acid clouds would be important to the designers of spacecraft that would be operating in that environment since this acid “goo” would cling to the surface of objects and potentially interfere with their operation.

Given the importance of improving our understanding of the processes and resources of the solar system,  a vibrant program of planetary exploration should be viewed as a key component of NASA’s mission.

New Horizons on the Web 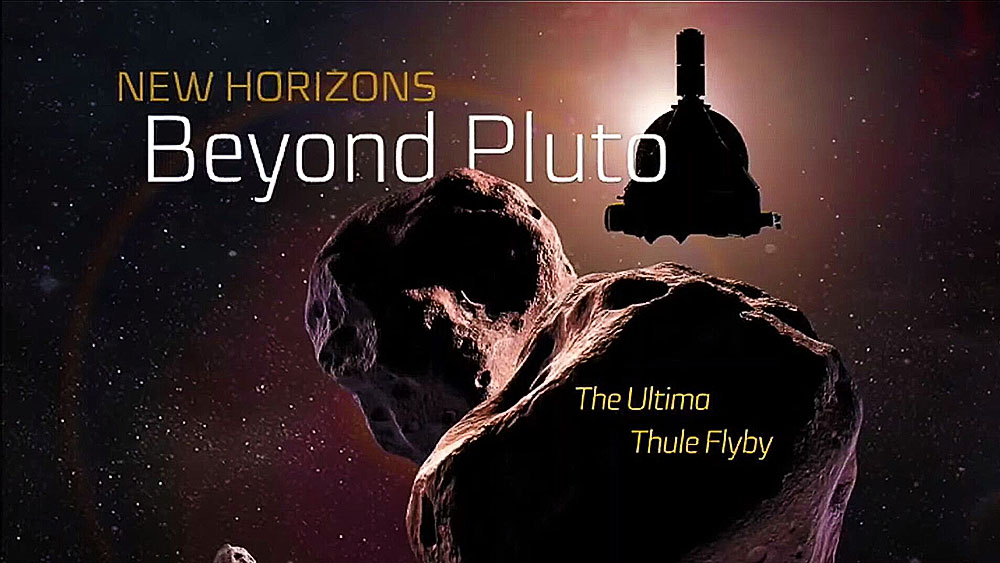 About Jim Plaxco: Jim Plaxco is an NSS Space Ambassador, President of the Chicago Society for Space Studies, and serves as a NASA JPL Solar System Ambassador.  Jim is also a former Vice President and former Director of the National Space Society.
Disclaimer: The views expressed in this guest post are those of the author and should not be considered as representing the views of the National Space Society.