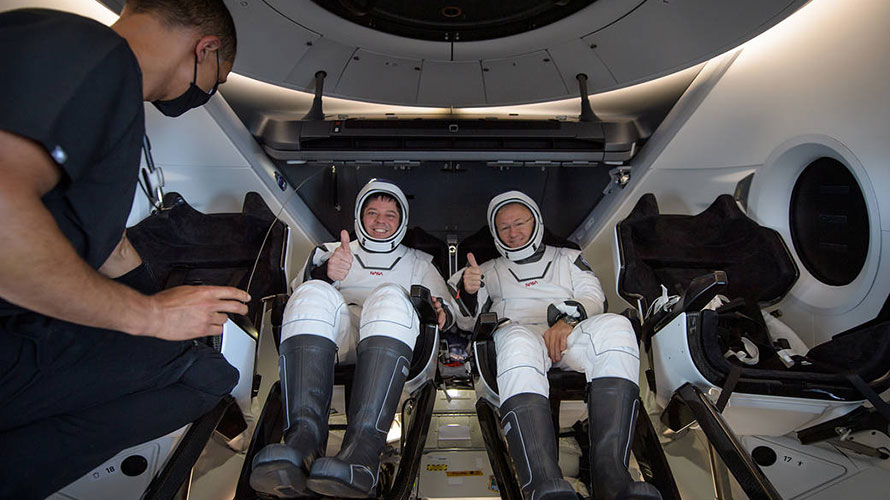 “Although space travel is today failing ludicrously to fulfill the promises of promoters, it still might one day become cheap enough to be accessible to ordinary people.” So wrote Freeman J. Dyson in The Sun, the Genome and the Internet, 1999

The successful completion of the Demo Mission 2 (DM2) test flight sets the stage for routine commercial crewed operations and ends the 9-year hiatus since NASA astronauts launched from American soil. DM2 was a nominal mission lasting 61 days originating at the Kennedy Space Center and terminating with a water landing off the southern coast of Alabama and southwest of Pensacola, Florida. The DM2 Endeavour test flight uncovered minor discrepancies, but none of the items noted would prevent the Crew-1 mission from launching in late-September on the second crewed missions.

Endeavour itself will be refurbished and used in SpaceX’s second operational crewed mission, Crew-2, along with the Falcon 9 booster used for the Crew-1 mission. This is a departure from previous statements indicating reuse of a Crew Dragon spacecraft and flight proven booster would be limited to ISS cargo resupply flights.

During the nine years since the last shuttle flight much has changed. The U.S. has developed three crewed spacecraft, two of which will be commercially operated. NASA is planning a crewed lunar mission. China is now operating in the crewed space arena and planning to build a space station. India is developing a crewed spacraft. Other companies are on the verge of starting commercial services to support tourism and research.

The impact of crewed space flight is far reaching, going beyond individual missions and having the potential to drive the general direction of space programs. What follows is a brief examination of the space economy and how commercial crew operations could accelerate access to space.

Due to factors related to reduced launch cost, technology improvements, and policy changes promoting less reliance on government support, a paradigm shift is occurring in the space industry. These changes are permitting a more cost-effective approach to spaceflight, thus stimulating increased commercial involvement.

As published by the Space Foundation in Space Report 2019: The Authoritative Guide to Global Space Activity, the global “space economy” in 2018 was $414.75 billion, up from $383.51 billion in 2017. The report tracks worldwide spending by governments, the private sector and consumers. Projections for future growth have led some to predict the space economy to be worth at least $1 trillion within 20 years. As a consequence, although the space economy retains a speculative aspect, a number of factors are coming together to suggest increased business involvement.

Other studies, such as the one performed by the Science and Technology Policy Institute (STPI), show different economic projections by adopting a more restrictive definition of the space economy that only includes the value of goods and services provided to governments, households, and businesses from space or used to support activities in space. The study excludes activities that are enabled by space, but are primarily generated terrestrially.

The STPI report estimates the total value of goods and services from and for space at $155.7 billion in 2013 and $166.8 billion in 2016. Thus, there is a large difference between STPI estimates and those of the other public estimates of the size of the space economy; STPI’s estimates are roughly half of other estimates.

It is questionable what part heavy lift rockets associated with crewed space will play in in the overall commercial space economy. Somewhat contradictory is the RAND report, “Assessing the Impact of U.S. Air Force National Security Space Launch Acquisition Decisions,” which indicates annual worldwide launches grew from 47 in 1998 to 71 in 2018; but commercial launches requiring heavy lift rockets remained at around 20 per year (SpaceX services about half of those launches). The report also warned that the commercial markets may not be able to support two U.S. launch providers in the long-term.  Although this report is government orientated, it still gives pause to question the growth of crewed space which is less definable.

Other organizations such as Morgan Stanley and the UBS AG Group expect substantial growth in the space economy, but one should understand to promote investment one must also promote growth.

No doubt the space economy has the potential for rapid growth. Many economic benefits have been cited, all of which can be highly profitable, but require an enormous amount of capital investment, accompanied by enormous risk.

The term “commercial,” for the purposes of this policy, refers to space goods, services, or activities provided by private sector enterprises that bear a reasonable portion of the investment risk and responsibility for the activity, operate in accordance with typical market-based incentives for controlling cost and optimizing return on investment, and have the legal capacity to offer these goods or services to existing or potential nongovernmental customers.

Commercial crew is a subset of commercial space. It is a generic term NASA applied to the Boeing Starliner and SpaceX Crewed Dragon programs. For the following discussion commercial crew has been extended to include all private company crewed programs.

Shown in the table below are the principle companies involved in Commercial Crew projects. It is standard practice to create a business plan which defines the approach for a new business endeavor. One of the plan’s major objectives is to establish return on investment (ROI). Typically, an analogous model is implemented to predict ROI. Commercial crew, however, does not have a business precedent; it is operating in uncharted territory and intuition takes over along with a higher degree of risk.

Considering the undefined nature of the commercial crewed space economy, financial offsets are necessary to mitigate risk. For our purposes, an offset is defined as a means of raising capital and obtaining fees that are related to the end company objective.  The table below lists the principle U.S. companies involved in the commercial crewed space economy along with their perceived long-term objectives, implementation and related financial offsets to help achieve success. It is notable that the financial offsets tend to rely on more definable business models. Consider also, for example, when Boeing obtains a NASA contract for Starliner this relates to a definable business model. However, what is lacking in precedents is the use of Starliner for private astronaut or tourist services.

2In January 2020 NASA awarded a contract to Axiom Space to attach a module to ISS that eventually will separate from it and operate as a free-flying commercial space station.

Although large private investments have been made, it is questionable when an inflection point will be reached allowing organic growth to self-sustaining commercial crewed operations.

The Concorde SST for example, flew 50,000 flights over is operational life time between 1976 and 2003, carrying 2.5 million passengers. Concorde’s late stage round trip international ticket price was approximately $12,000. From this it can be inferred that there is a market for premium priced transportation services, which is further supported by Aerion developing a supersonic business jet. Also, USB AG Group has predicted that the space tourism market could be as much a $23 billion by 2030.

But the question remains, how many space tourists are available to pay a sub-orbital fare of $250,000 or a multi-million-dollar orbital fare? For most people even $12,000 is too expensive.

Other areas such as manufacturing, research, power transmission, and extra-terrestrial resources do have the potential to self-sustain commercial crew but will require upfront investment for the foreseeable future. So, the dilemma is what can we do now to get from a limited flight situation to something approaching commercial or military aviation.

Considering what has been said, the key controllable near-term factors to increase crewed flights are:

Items 1 through 5 are currently addressed by various agencies and organizations. But the simple truth is, item 6, although difficult to maintain, drives the others. One may speak of the great possibilities associated with space, from eliminating pollution, to finding extraterrestrial life, but they do not sustain the public imagination. Why? Yet, 650 million people watched Neil Armstrong set foot on the Moon, movies such as Apollo 13, Interstellar and The Martian are popular and series like Star Trek and Star Wars have retained their appeal over many years. So, the answer to why space does not sustain the imagination of the general public is, it’s not about space, but rather the interest is in the human adventure. And, space brings to the human adventure new aspects that boggle the mind. Space organizations and agencies often emphasize items that appeal to other enthusiasts who are already sold on the ideas which tends to maintain a status quo public appeal. The bottom line to all this is, if you want to increase interest in space, create a campaign emphasizing the human adventure, and items 1 through 5 will more easily follow.

This brings us back to why commercial crew is so important. It’s about people to which other people can relate. Great stories lie in the future, from exploring the poles of the Moon to climbing Olympus Mons.