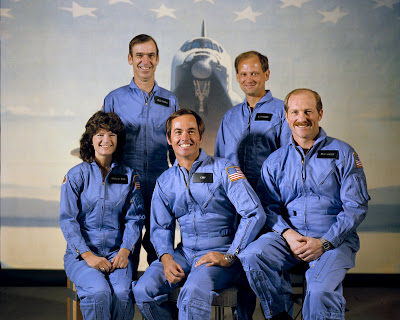 STS-7 crew, 1983. Sally Ride, John Fabian, Bob Crippen, Norman Thagard and Fred Hauck.
I hate it when people write tributes or ruminations about people they admired and attempt to make the piece about their own life, rather selfishly, but in this case, I’m going to have to make a departure.
I remember when Sally Ride became the first U.S. woman in space with her STS-7 flight in 1983. In 1963, the USSR sent the first woman into space, Valentina Tereshkova. It took our country 20 years to get with the program and send our own women into space; the Mercury 13 were rather unceremoniously blocked from being womankind’s first foray into spaceflight in the 1960s. Sally Ride was literally the first woman who entered my consciousness as having a career in science. For me, this was a huge deal and I wanted to be like her some day, having an awesome career in any field of my choosing. Because of her, I really think I was able to do that. The next big role model I remember was Judith Resnik, also a great astronaut and scientist.
*****
I got the news of Sally’s passing from my husband as I walked in the door; I had just gotten home from work. It was a good thing he gave the news to me after work, as I am a bit of an emotional mess…I flashed back to all of those spaceflight books I devoured as a kid and remembered how awesome, carefree and smart Sally seemed, with her flying hair and her jaunty smile. Did it really seemed like those days would ever end? Not this soon. Just looking at the achievements of my female friends in all fields – not just science – one can understand how Sally Ride did so much for us and made so much eminently possible in our lifetimes.
*****
Here’s the official press release. Like I said, I loathe self-serving tributes…I hate it when people equate others’ losses with themselves, if that even makes any sense. But Sally really made a very positive impact on my life and I know she made a huge impact on the lives of so many young women. Her death will not end that, as death never really ends anything. I know the stars are a better place tonight, because of her.
“…In one of the stars I shall be living. In one of them I shall be laughing. And so it will be as if all the stars will be laughing when you look at the sky at night.”
– Antoine de Saint-Exupéry, The Little Prince 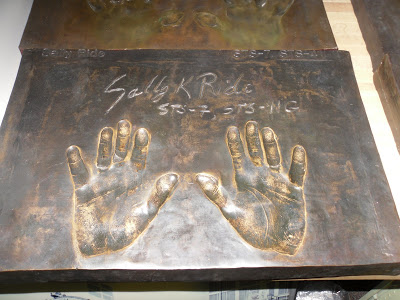