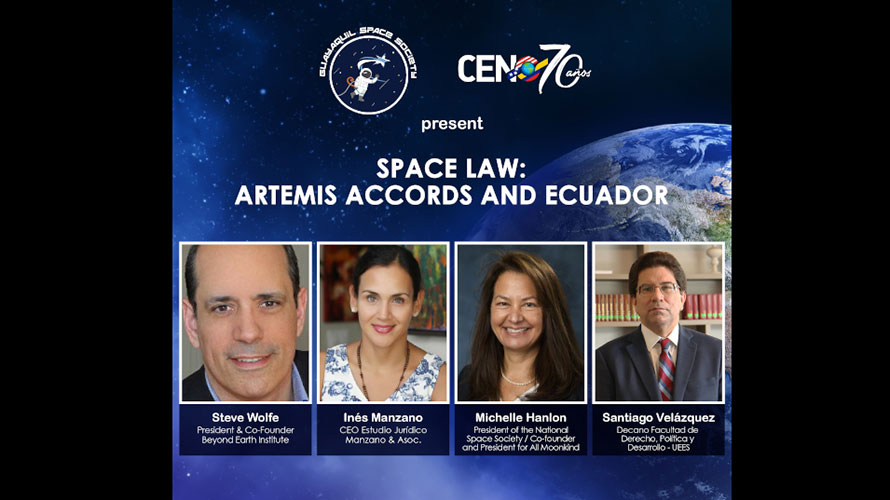 The Guayaquil Space Society (GSS), a Chapter of NSS in the largest city in Ecuador, hosted a meeting on May 19, 2021, titled SPACE LAW: ARTEMIS ACCORDS AND ECUADOR. The entire presentation is available on YouTube. All but the first presentation is in English. Presenters include:

These presenters explained and connected space law, transitions of technology, advancements in space, and the Artemis Accords.

Starting the presentations, Velázquez provided a basis for the meeting with how space law originated, brought us to the future, and affects our daily lives. He explained how individuals, companies, countries, and nations can get involved with regulations.

Wolfe described changes from the past to present technologies and how they led to space advancements. He mentioned two major innovations were CubeSats (smaller satellites) and the SpaceX Falcon 1 (cheaper rockets). He made the point that due to the safe landing of SpaceX Starship, the cost per pound of payload will decrease to less than $100.

Wolfe affirmed a numerical increase in percentage of satellites per advancing decade (30% increase 2000–2010, 240% increase 2010–2020, and a predicted greater percent increase 2020–2030). He listed the positive aspects of this increase in satellites: the potential of communication, observations of Earth, applications to impact human lives (saving life, food security, communications, and wealth to all nations on Earth). Currently Wolfe and GSS President Robert Aillon are using satellite information in a case study for the banana industry in Ecuador. However, Wolfe mentioned the negative effect of this increase in satellites is an increase of space debris.

Wolfe mentioned that the U.S. was a world leader in addressing space debris. He mentioned the U.S. Space Policy Directive 3 on orbital debris mitigation standard practices and commercial applications can provide a solution for space debris. In the past, a satellite in space ceased to be used after it ran out of fuel. Now, companies are beginning to offer mission robotic vehicles, which can extend the life and refuel machines in space and locate and retrieve space debris.

Wolfe offered that there has been an increase in the number of spaceports: in the U.S. (government, 12; licensed commercial, 12; private, 4; and proposed, 4), and internationally (including Ecuador over 40 have been proposed). A Global Spaceport Alliance exists, and Wolfe promotes and provides services for the spaceport community.

The U.S. government through the Defense Advanced Research Projects Agency, the research arm of the Department of Defense, is spending to “develop technologies for people to live on the Moon and work in space.” Lunar bases are being planned by the U.S., Europe, and China and Russia. However, “there are tensions” and “discussions that China is looking to develop an anti-satellite weapon.” Wolfe then moved forward to the United States Space Force and describes their mission “to maintain, protect, and expand the U.S. fleet of advanced military satellites that form the backbone of U.S. global military operations.”

Wolfe proceeded to tell of the recommendations of a research study about policies to accelerate the establishment of communities in space by Beyond Earth Institute. These recommendations included that “the U.S. should establish a whole-of-government sectoral trade and exploration agreement with like-minded allies” . . ., and . . . “to join in bilateral and multilateral accords to spur more rapid development of the space economy and achieve a permanent, widespread human presence in space.”

Hanlon presented “The Artemis Accords: A Brief Review.” She emphasized her work is focused on figuring out and providing “the laws and regulations necessary to make us a space faring species,” “looking at supporting commercial space,” and “thinking about what it means for humans to be spacefaring.” She is thinking ahead about how we can protect the environment, human rights, and labor laws in space and lay the foundation so that our progeny and futures are secure, sustainable, and successful.

She points out that “the Outer Space Treaty is the ‘Magna Carta’ of space law’” and that while the Treaty offers guiding principles, it also leaves many gaps. Hanlon highlighted the following areas of the Treaty:

The Artemis Accords was signed by representatives of space agencies from these countries: Australia, Canada, Republic of Italy, Japan, Luxembourg, The United Arab Emirates, United Kingdom, and United States on October 20, 2020, and then from South Korea in May 2021.

Hanlon ended her presentation with the illustration of a bootprint on the Moon representing “humankind’s very first step off of this Earth” and the statement of “this milestone of reaching the Moon is humanity’s greatest technological achievement.” She emphasized collaboration will aid achievement.

Then, Ecuador’s participation in space law and interests in space were well represented by Inés Manzano. She spoke of Ecuador signing the Outer Space Treaty in 1967. She mentions how the current president of Ecuador has made it clear of his preference of satellites for forest control.

Due to Ecuador’s diverse ecosystem, crops, and climate change, Manzano believes that data from satellites can positively help Ecuador achieve better outcomes. Satellites offer Ecuador an abundance of information, which could not be gathered by other means. Manzano mentions satellites offer a means for sustainability, monitor low carbon technologies, monitor flooding and sinkholes, gain farmers the knowledge they need to predict and grow better crops, quantify cars to determine population, and detect building construction.

Understanding the proliferation of satellites and how the expansion of data and technologies will increase satellite capabilities, Manzano promoted the transparency of activities in space and the principle for Good for all Mankind.