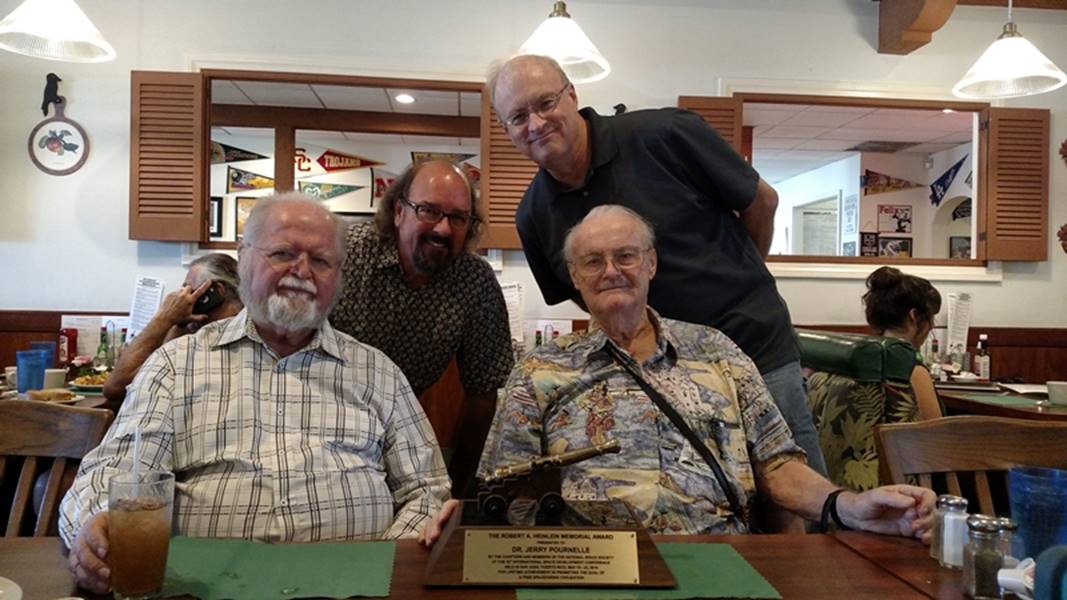 From left to right: Larry Niven, Dave Dressler, Alex and Jerry Pournelle at the Four ‘n 20 in West LA

Over the summer, I read three acclaimed collaborations from Jerry and Larry: A Mote in God’s Eye, Lucifer’s Hammer, and Footfall, all available at Amazon. (Revenue from Amazon enabled Blue Origin—go Blue Origin!)

The usual question people ask them is “How do you two work together?” and the answer, spoken in unison, is “Superbly.”

I asked Jerry what he thought about Starshot (from Breakthrough Technologies, Pete Worden’s latest venture) as it relates to A Mote in God’s Eye, and science fiction moving into the realm of science fact. Jerry gave credit to physicist Robert L. Forward, the creator of the beam-pushed lightsail concept in 1985.

Jerry told in depth stories about the times he shared with Robert and Virginia Heinlein and where they lived. I further realized how appropriate the Heinlein Award was for Jerry as he was a very close friend of Heinlein’s. The Heinlein Award features a brass cannon inscribed with one of Heinlein’s favorite acronyms, “TANSTAFL.” The original title of The Moon is a Harsh Mistress was to have been The Brass Cannon, but reasonably, the publisher changed it. The cannon is featured in that novel as a symbol of the Lunar Republic.

Jerry shared his personal account of Robert’s relationship with the cannon:

The story about the cannon is not one that happened to Robert or anyone he knows so far as I know. I have heard him tell it several times over the years, and it’s always about a nameless city councilman’s brother-in-law who was given a sinecure job polishing the brass cannon in front of the court house. One day he came home from work, saying that he’d had this job for years and was very good at it, but he wasn’t getting anywhere, so he had decided to quit. His wife was alarmed and asked what he would do. He told her he had thought about this a long time, saved up his money, and bought his own brass cannon, so now he was in business for himself.

The story about TANSTAFL was originally my father’s and wasn’t associated with the brass cannon. Dad was fond of telling about free lunch counters, and always added There Ain’t No Such Thing As a Free Lunch, TANSTAFL. A well known San Francisco news columnist told this, crediting Mr. Heinlein, who took the trouble to get the chap – I forget who he was, but apparently he was well known in San Francisco – to say in one of his Sunday columns that Robert had got it from me, and that my father, who was in radio in the 30’s and at one time the general manager of WHBQ in Memphis as well as Chief announcer and sales manager, was actually the originator. I grew up hearing it. If dad got it from anyone before him I never knew it.

Robert eventually acquired his own signal cannon. Now Jerry has one too.

What a privilege and honor it was to spend quality time with two of the giants of hard science fiction. I only wish I had a cannon to share with Larry Niven. I invited Jerry and Larry to be guests of honor at ISDC 2018 in Los Angeles. They gratefully accepted and appreciated the convenience. Thank you NSS Membership for supporting ISDC, the Awards Committee and the awards we bestow on the movers and shakers that are opening the frontiers of space.